Women stepped up to help in WWII effort 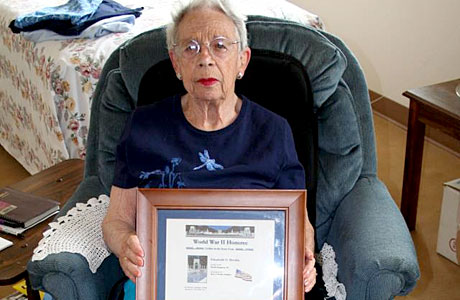 Betty Breslin displays a certificate honoring her service to the overseas effort during WWII. Pictured below is a B-24 Liberator.

Most Americans are familiar with the term “Rosie the Riveter,” the iconic woman who worked to build ships and aircraft during WWII. Over the years she has also come to symbolize women who worked in all sorts of non-traditional jobs handled while America’s men were away at war.

“I tried to join the Army, but they said I was too small,” she recalled. At four feet nine inches and less than 100 pounds, she would soon find there were other ways in which she could serve her country and that her small stature could be an advantage.

“My older sister told me they were looking for civilian workers at Quonset Point Naval Air Station,” she said. “I wanted to help in the war effort so I filled out an application and got hired.” Quonset Point, near North Kingston, Rhode Island was built shortly before the U.S. entered the war and a was a primary defensive site on the east coast. Soon Betty, her sister Madeline and her mother were all working at the base.

“I started working in the pump department,” she said. After a short time there, she was moved to the electrical department and soon found herself learning to read blueprints and schematics, and learning the codes for the various wires she would eventually be responsible for connecting on aircraft brought in for maintenance and repair.

After three month of intensive training, the petite teenager was tracing out problems and making repairs to the wiring on a variety of aircraft, including the B-24 Liberator bomber, B-21 bomber and the 4F4 Wildcat fighter.

“We also worked on a plane you never see now. It had an open cockpit and the skin was all canvas. They used to say that plane was held together with chewing gum and spit. Because I was so little they would come and get me to repair the taillight in that plane.” Betty said there were plans at the time to use the plane to deliver bombs similar to the V-2 bombs Hitler’s Germany used to terrorize Londoners during the war.

Of all the aircraft she worked on, Betty said her favorite was the B-24 which she became familiar with “from nose to tail.” Always in the back of her mind she said, was that the lives of the aircraft’s crew might depend on the accuracy and care taken in the course of her work. “We all thought about that,” she said.

Some of the planes on the base were equipped with the Norden bombsight according to Betty. “The bombsight was top secret,” she said. “Sometimes when I came to work in the morning I was told I would need a special code.” Without the code, the worker would not be able to enter the storage area where the bombsight was kept. The apparatus was considered so valuable and secret that it was immediately removed upon a plane’s arrival on base and kept in a secure area. Betty said she and the bombsight would be escorted by two armed naval officers out to the plane where she would wire it into position again.

Although the majority of civilian workers at Quonset Point were women, there were also quite a few men. Betty said some of the men had been excluded from the military for medical reasons, and like her they seized the opportunity to help in the war effort by other means. Betty, who is always quick to point out that she was, “not a Rosie the Riveter,” said there were numerous workers on base who performed a variety of tasks including electricians, riveters and mechanics. The planes she worked on were primarily used for training, so the majority of the damage she repaired was due to erosion caused by the salt air and water, although there was an occasional crash at the base.

Eventually, she met John Breslin, a young soldier from Brooklyn, NY who was assigned to an artillery group nearby charged with guarding the east coast.  The young couple soon married and John was shipped off to the Philippines where he would serve until the end of the war with Japan. He would later return to Rhode Island to a young wife and an eight month old son.

Women workers like Betty Breslin and millions of others in business, industry and the military would play a key role in the success of the allies against Germany and Japan. In 1944 over 35 percent of American women were in the civilian work force. The ranks of female workers between 1940 and 1945 swelled by 50 percent. Up until the war, most married American women did not work outside of their homes. Active recruitment sponsored by the government would soon change that, as millions of women took on jobs once thought to be unsuitable for women. Many of the recruiting posters from the era are available for viewing at the U.S. Library of Congress Web site which can be located by conducting a Google search and using the keywords: Library of Congress WWII women workers.

So vital was the role of military civilian workers to the successful outcome of  WWII they are eligible to be included in the registry at the National WWII Memorial in Washington, D.C. Honorees receive a certificate suitable for framing recognizing their contribution to the country’s all out effort in WWII. To register a friend or loved one, go to http://www.wwiimemorial.com/default.asp?page=registry.asp and choose Register an Honoree from the  toolbar at the top of the page. Fill in the online form and either order the certificate or print it yourself.

Like Betty, those of the “Greatest Generation” are well along in years, making it more important than ever to record their histories for future generations. Their stories are remarkable and inspiring, marking a time when the entire nation was united against a common foe. We must never forget them.