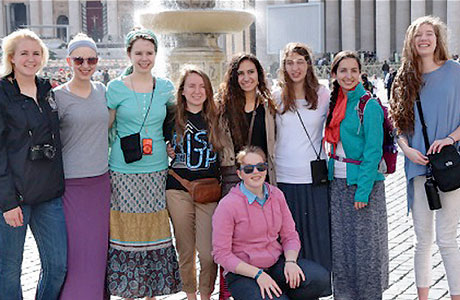 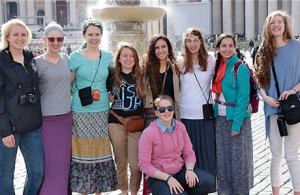 I stood in awe as my eyes beheld for the first time the magnificent presence of St. Peter’s Square within the heart of the Vatican. The afternoon sunset cast a red hue on the iconic dome of St. Peter’s Basilica, and the vacancy of the large plaza provided a peaceful atmosphere with which to take in the grand architecture of the scene. It was my first evening in Rome, and I felt at home, as if I hadn’t flown thousands of miles across the Atlantic to stand upon the cobble stone of this ancient capitol.

Months earlier, St. Mary’s Parish of Littleton, Colorado had invited me to pilgrimage with them to Rome. After months of fundraising and weekly meetings, I found myself standing in the Eternal City lost in the intense detail of the marble statues and décor carved into the basilica.

I stood at the base of a four-thousand year old Egyptian obelisk erected in the center of St. Peter’s, fixated on the doors of the basilica. The size of everything in the Vatican truly overwhelmed me. I couldn’t believe that through human will power, such a magnanimous edifice could stand so boldly and reach far across the centuries to entertain the eyes of many diverse people in the twenty-first century.

The glorious architecture I encountered in Vatican Square continued its influence on me as I walked for twelve hours on the “sette chiese di roma” or the Seven Churches Pilgrimage. Although each basilica had its own flavor and unique build, I could sense that no matter what color the marble or how tall the pillars supporting the weight of each cathedral, each spoke to me in the same way- with beauty.

Finding a pattern of beauty in the architecture, I continued to find patterns while in Rome. One of the first patterns my group noticed when stepping of the bus to walk up to our apartment was the amazing quantity of cobblestone throughout Rome. I didn’t mind it at first, and found it much more aesthetically pleasing to me than concrete, but after walking close to ten miles every day, my feet started to regret the endless streams of cobblestone flowing throughout Vatican City. The lack of concrete in Rome was to me as vast and expansive as the plains of Wyoming and eastern Colorado-the cobblestone seemed endless!

The pattern of our pilgrimage continued with four audiences with Pope Francis in St. Peter’s Square throughout the week. We also had the great privilege of joining former Archbishop of Denver, Cardinal James Stafford on a private tour of the Vatican gardens!

Looking back on this exceptional journey, I am glad that I had the opportunity to travel in my youth. As a high school graduate in the class of 2014, I look forward to starting my career as a college student, and I hope that I might reflect on my experiences in the Eternal City with a glad heart and bring the patterns of beauty I witnessed in Rome to life as I share my journey with others.