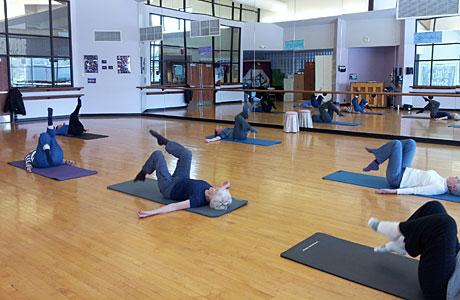 Laurie Wood, background, instructs a Pilates for Ageless Adults class at the Arvada Center in February. New classes will begin in April.

Joseph H. Pilates (pronounced Pi-lah-teez), born in Germany in 1880, created the Pilates method of exercise and brought it to New York City in the 1920″s. Joe’s motivation was to help improve his own health since he was a frail child suffering with asthma, rickets, and rheumatic fever. He overcame his physical limitations through exercise, bodybuilding, skiing, diving, and gymnastics, becoming a model for anatomical drawings at the age of 14.  Joe moved to England in 1912, where he worked as a self-defense instructor for detectives at Scotland Yard.  When World War I broke out, Joe was interned in England as an “enemy alien” with other German nationals. While he was there, he refined his ideas and taught his system of exercise to other internees and even rigged springs to hospital beds, enabling bedridden patients to exercise against resistance, an innovation that led to his later equipment designs.  An influenza epidemic struck England in 1918, killing thousands, but not one of Joe’s trainees died.  This, he claimed, testified to the effectiveness of his system.

Joe eventually emigrated to the United States in 1923.  During his voyage, he met Clara, whom he later married.  Joe and Clara opened a fitness studio in New York City, sharing an address with the New York City Ballet.  By the early 1960’s, Joe and Clara had many clients from the dance community, including George Balanchine and Martha Graham and many of their dancers.  After Joe’s death in 1967, at the age of 87, many of his students went on to teach the Pilates Method across the country adding their own innovations and advancements to his original work.  Joe did not leave a will or a successor to his work, but Romana Kryzanowska became the director of his NYC studio in 1970, while Clara continued teaching.  Some of the respected teachers that were once students of Joe and Clara’s that are still training the next generations are:  Ron Fletcher, Kathy Grant, Lolita San Miguel, Eve Gentry, Bruce King, Mary Bowen, and Robert Fitzgerald.

By the 1980’s, the media began to cover Pilates extensively, making it very popular.  Now Pilates is part of the fitness mainstream, and can be found in recreational centers, physical therapy clinics, and private studios.  Joe once proclaimed, “I’m fifty years ahead of my time.”  And he was right.

Pilates involves over 500 exercises that can be done on a Mat or on apparatus specifically designed by Joe, like the Reformer, the Cadillac, the Chair, and the Barrel.  Pilates can be done in a group Mat class, privately on apparatus, or in a group apparatus class.  Many of the exercises are done lying on the back, with some side-lying, prone, seated, and standing exercises.  The apparatus is designed to either assist the body in basic movements or to add resistance to challenge the body as it gains stability and strength.  The matwork uses the body’s own weight for exercises and props can be added for variety.

Pilates has now evolved into two categories, the Classical and the Therapeutic.  The Classical Method maintains an advanced set routine of the original work while the Therapeutic Method breaks down and adapts the original work into rehabilitation stages, making it easier for any population, physical condition, or age group to gain the benefits of the Pilates Method.  The Therapeutic Method is best for the aging body and for anyone dealing with a spinal condition, a faulty movement pattern, a gate issue, or who has been released from physical therapy after a surgery, accident, or injury, and who needs a post-rehab program before returning to the gym.

The Pilates Method combines the best of Western and Eastern philosophy, blending the mind and body as a harmonious unit.  The Eastern approach to exercise is a path to calmness, being centered and whole, with an emphasis on stretching and limberness.  The Western approach emphasizes motion, muscle tone and strength.  Pilates is a wonderful combination of both.

What does Pilates do for a body?

We all deserve to stay mobile and independent as long as we can and to enjoy our lives to the fullest.  The mind, body, and spirit approach of Therapeutic Pilates is a great way for Ageless Adults to do just that.

Laurie Wood is a Certified Pilates Post-Rehab Practitioner and Licensed Massage Therapist working out of her
home-based studio in Broomfield.  She teaches Pilates for Ageless Adults at the Arvada Center and has new classes starting in April, so please call or go to her website for locations, times, and registration.  She can be reached at
720-383-5712, emailed at woodpotter@aol.com, and her website is goodvibrations.massagetherapy.com.