Publishers Note: We received this message requesting a story. After reading the message I decided I couldn’t do a better job than Fredrick does in the following piece.
Please read his article and share it with family and friends. It could make the difference in someones life. If you’re able to help in anyway I’m sure our Warriors On Catarack would appreciate your generosity.

I would very much like to have  Prime Time print a story on my nonprofit Wounded Warriors effort. I am trying to grow, more river trips, a bit more funding. I am finding that these 4-day white water raft expeditions through Canyonlands National Park on the Colorado River are big medicine for our disabled veterans. The level of communication and the bonding and spontaneously formed sup­port groups have shown to be very healing. A VA Hospital therapist who has accompanied her vets on these trips told me that these soldiers are better healing among themselves than anything that the VA Hospitals can achieve with their therapy and pharmaceuticals. 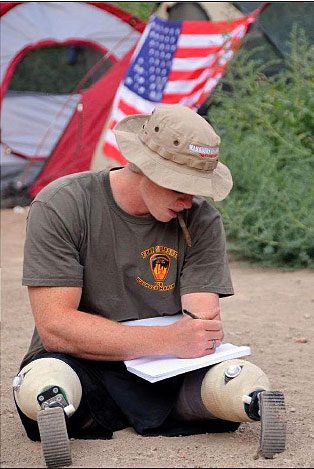 Another VA therapist told me that she had 9 Warriors on their High Suicide Risk Watch List, and after the river trips and a few other outdoor activi­ties, they were able to graduate all 9 off that list.

A young Marine who had watched and listened to his good buddy scream while he burned to death in a HUMMWV because he could not get him out, subsequently tried twice to commit suicide, and after a river trip, he called me to thank me for saving his life.

Another that was shot in the head, had aphasia, could not form sentences, was down on the beach at the second river camp talking with other combat soldiers.

Note that now 8000 veterans die by their own hand each year out of hope­lessness and desperation and isolation. That is more than we have lost in 10+ years of combat in the Middle East. This does not have to be. I am finding that this simple white water trip with the camp­fire time and camaraderie is a wonderful and very effective venue for therapy of battle wounds, visible and invisible. I hear these soldiers in camp late into the night gathered around and talking their stuff. They won’t talk on this level to anyone else.

This is my 4th year doing these white water trips. I can accommodate most levels of disability: wheel chairs, tri-amputations, service dogs, severe PTSD and TBI, severe gunshot wounds. . . This year I am staging four 4-day white water trips. Each of these trips will take 25+ Wounded Warriors and therapists and caregivers. One is solely for Special Op­erations wounded, Navy Seals, Army Rangers and Green Beret, Air Force HALO, etc.

And new this year is an All-Woman Wounded Warriors trip, to which the response has been overwhelming. Many of these women suffer deep psychological trauma from rape and sexual assault in the Military, and I felt that having male soldiers in camp would have a chilling effect on what we want to accomplish with relaxed openness and bonding. The commercial river outfitter that is conducting the trip is furnishing 4 excellent female river guides, and my support crew of 6 is also female. I expect wonderful things out of this trip.

My (humble) web site is www.WarriorsOnCataract.org, and face­book at Warriors on Cataract.