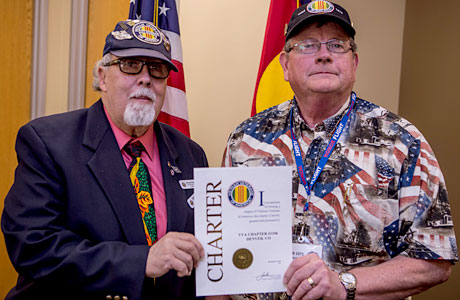 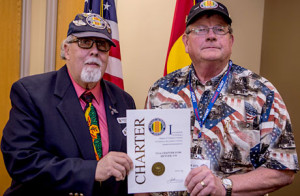 Centennial, Colo. — Chapter 1106, the South Metro Denver chapter of the non-profit Vietnam Veterans of America, has been formally chartered by the national organization. The Vietnam Veterans of America (VVA), with nearly 75,000 members nationwide, is the only national Vietnam veterans’ organization congressionally chartered and exclusively dedicated to Vietnam-era veterans and their families.

The VVA provides assistance and help in many areas for not only Vietnam Veterans, but Vietnam-era veterans (veterans of all services who served worldwide from 1962 to 1975) any many other veterans as well.

The new South Metro Denver Chapter 1106, is the third chapter of the national organization to be formed in Colorado and primarily serves veterans in Denver, Arapahoe, Douglas, and Elbert Counties. 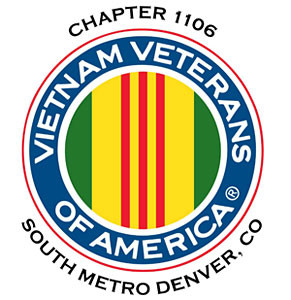 Lee White, founder and president of Chapter 1106 says, “There are approximately 146,000 Vietnam-era veterans in Colorado and a majority of them are in the Denver metro area. As this population gets older, more and more health issues including, mental, physical and other effects that begin to evidence themselves, which just a few years ago, we didn’t know about. Now, our vets and their families need to know how to handle them and where to get help. Today, we can connect the dots to the health issues where a few years ago, we couldn’t.”

“For instance”, White continued, “many of today’s major health issues, such as diabetes, a variety of cancers, kidney failure and others have now been traced back to the dioxin Agent Orange as the ‘presumptive cause’. Agent Orange was sprayed heavily in the jungles and around the airbases in South Vietnam. Homelessness, among all vets, including Vietnam Vets, continues to be an area where we want to help. We want to let those suffering from th issues know there may be a service related reason and cause for their health issues and how to get assistance.”

The Vietnam Veterans of America can assist their member vets recognize health issues, and direct them to where they can get help. Today, the disability known as Post Traumatic Stress Disorder (PTSD). is widely recognized and treatable. During Vietnam, many service men were given less than honorable discharges, eliminating them from benefits because they were thought to be disruptive, not knowing it was really what we now know as PTSD.

Added White, “For those reasons we started Chapter 1106 to help our vets and their families in the South Metro Denver area work their way through these issues which maybe they didn’t realize were attributable to their Vietnam service. To do this, and to help our brothers, we want to gain as many members as possible and will work to build our base.

”Vietnam Vets typically are not joiners, but we hope they realize, many of their current or upcoming health issues just may have a connection to their service. We want to show them how to get assistance, support, medical help and possibly, compensation,”
said White.

The chapter receives funding through clothing donations given to
http://www.clothingdonations.org/, car donations through http://vietnamveteranscardonation.org/ , various fund raisers and contributions from major corporations to assist supporting veterans, and by participating in a number of civic events.

About the Vietnam Veterans of America
Founded in 1978, The Vietnam Veterans of America is a non-profit organization, with over 75,000 members in 650 chapters across 48 states nationwide, including U. S. territories Puerto Rico, the Virgin Islands, Guam, and the Philippines. It can be found at www.vva.org. A YouTube video overview can be viewed here:

About Chapter 1106
The South Metro Denver Chapter 1106, holds monthly meetings on the first Saturday of each month at 9:00 a.m. in the board room of the South Metro Fire & Rescue HQ Building, 9195 E. Mineral Avenue, Centennial, CO 80112. Guests are welcomed.