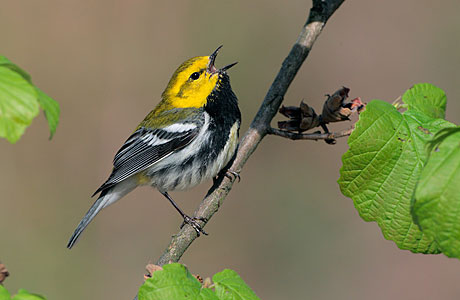 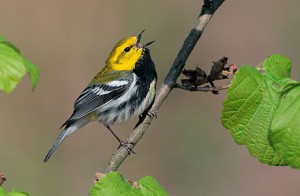 As the group of birders gathered at the Forest Lodge Nature Trail parking area, a cold breeze scurried under gray clouds. We scanned the treetops, looking for the flitting shapes of warblers. Just as I finished talking about the new Center for Freshwater Innovation that Northland College is starting across the road, the clear song of a black-throated green warbler pierced into our circle.

“Heroes in a half-shell,” I imitated the bird, using a tune that is familiar to anyone who grew up with the Teenage Mutant Ninja Turtles. A few in the group chuckled; a few looked confused. Creating fun mnemonics is one of the best parts of learning to bird by ear, I think. A college classmate, who had turned to nature in an effort to stay out of trouble during his childhood in Chicago, had clued me in to the black-throated green warbler’s song lyrics long ago. While bird song mnemonics may sometimes be a little anthropomorphic, I think that the value they convey by helping us remember the songs is much greater than any potential negative side effects.

Professional birders, and the serious guidebooks, do describe the song more reservedly as “zee zee zee zoo zee.” Other folks, somewhere in between on the scale of birding humor, think “trees, trees, murmuring trees,” sounds more like it.

The trees were certainly murmuring as the cold wind chased us into the protection of the forest. Bird songs echoed from all around us, but spotting the singers was a different story. The ovenbird’s ringing call: “Teacher. Teacher! TEACHER. TEACHER!” was especially common, as was the low thumping of a drumming grouse.

Near a small patch of conifers, we strained to see the owner of a thin, high-pitched song. In a flash of orange, black, and white, the American redstart darted between trees and flitted about, showing the “flash patterns” on his tail. These bright patches of color can distract insect prey long enough for the redstarts to nab them with their wide, flat beak.

Another glimpse of orange flashed through my binoculars but that’s all I saw of the blackburnian warbler. With a brilliant orange throat and striking black face-markings, these tiny insectivores are a treat to see. Seeing them is not so easy though, since they spend much of their time high in the tree canopies, with only their thin and very high-pitched song to hint at their presence.

It’s no coincidence that the deep, throaty songs belong to birds (like the ovenbird and grouse) that hang out in the understory. These longer wavelengths of sound travel farther, and can push their way through more interference from branches and leaves.

In contrast, birds who sing from the high canopy (like the black-throated green warbler, the redstart, and the blackburnian warbler) use piercing, short-wavelength sounds to convey their important messages through the treetops.

The characteristics of high and low songs can be important at other times, too. Noise pollution, like that created by compressor stations placed in the middle of the Canadian wilderness (used to generate pressure in pipelines) or from highway traffic, can actually cause birds to raise the pitch of their songs. Although females find the low-voiced males to be sexier, males have to raise their pitch in order to be heard at all in areas will noise pollution. This can decrease breeding success.

Of course, sometimes birds vary their songs by choice, in order to convey something important. Continuing through the woods, we heard almost constant songs from the black-throated green warblers. But they weren’t singing about turtles this time. The song had changed to a more descriptive: “I am black and green,” described in the guidebooks as: “zoo zee zoo zoo zee.”

Apparently, the first (and rarer) call we heard in the morning was a warbler in love, trying to woo a mate from near the center of his territory. As the day progressed, the warblers switched their calls to full-on territory defense mode. Singing from the edge of their personal space, the males were warning competitors to move on.

Move on we did, back to our warm cars and off to more Chequamegon Bay Birding and Nature Festival field trips. As I waved goodbye to the last car, the quiet notes of a blue-headed vireo drifted over the trees. Slowly and sweetly it sang “see you
be seeing you
so long.”

For over 45 years, the Cable Natural History Museum has served to connect you to the Northwoods. Come visit us in Cable, WI! Our new exhibit: “Lake Alive!” opened May 1, 2015, and will remain open until March 2016.

Find us on the web at www.cablemuseum.org to learn more about our exhibits and programs. Discover us on Facebook, or at our blogspot, http://cablemuseumnaturalconnections.blogspot.com.