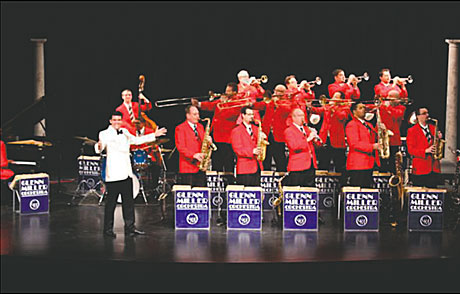 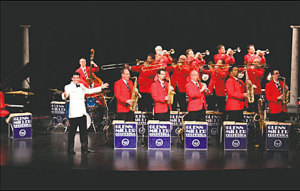 “The hardest thing in the world is to start an orchestra and the next hardest, to stop it.”

That bit of wisdom was uttered by Hans Richter more than a century ago, but he might very well have been speaking about Glenn Miller Orchestra, which appears in Denver at the Paramount Theatre, on Saturday, October 25 at 7 PM.

The first orchestra Glenn Miller formed didn’t make it at all. It was a total and absolute failure. But Glenn knew what he wanted, held to that dedication and relentlessly worked to succeed. He launched his second band in March of 1938, and unlike the first band, it became an enormous success. And it had been a “hit” ever since.

The legendary Glenn Miller was one of the most successful of all the dance bandleaders back in the Swing era of the 1930s and Ô40s. A matchless string of hit records, the constant impact of radio broadcasts, and the drawing power at theatres, hotels and dance pavilions built and sustained the momentum of popularity.

Glenn disbanded his musical organization in 1942, at the height of its popularity, volunteered for the Army and then organized and led the famous Glenn Miller Army Air Force Band. It went to Europe to entertain servicemen, and then, on December 15, 1944, Major Miller took off in a single-engine plane from England to precede his band to France, never to be seen again. The army declared him officially dead a year later.

Due to the popular demand, the Miller Estate authorized the formation of the present Glenn Miller Orchestra in 1956 under the direction of drummer Ray McKinley, who had become the unofficial leader of the army Air Force Band after Glenn’s disappearance. Since then, other leaders have followed Ray including clarinetists Buddy DeFranco and Peanuts Hucko, trombonists Buddy Morrow, Jimmy Henderson, Larry O’Brien and tenor saxophonist Dick Gerhart.

The 19-member band continues to play many of the original Miller arrangements that keep exciting fans who have not heard them played for a while. Additionally, they are also playing more modern selections in the big-band style, carefully selecting only those newer tunes that lend themselves naturally to the Miller style and sound, carefully selected pieces that will stay around for a while. With a repertoire of over 1,700 compositions, the Glenn Miller Orchestra will play such classics as In The Mood, Chattanooga Choo Choo, A String of Pearls, Moonlight Serenade, Tuxedo Junction, Little Brown Jug, Danny Boy, Stardust, Pennsylvania 6-5000, and many, many more.

Considered the greatest band of all time, The Glenn Miller Orchestra is the most sought after big band in the world today, playing an average of 300 live dates a year around the globe to millions of fans. Most of the band’s shows are sell-outs. It has proven staying power, and its popularity has never seemed to wane.

A legend lives on with the big band sounds of The World Famous Glenn Miller Orchestra, with musical director Nick Hilscher, Saturday, October 25, 7 pm (doors open at 6pm) at the Paramount Theatre.

This concert benefits Colorado Public Television 12 and is co-presented by Studio 1430 KEZW with host Rick Crandall. Sponsors include 50+ Marketplace, Prime Time for Seniors, Maggianos of Little Italy and Integrity Limousine.