The Wizard of Oz – Play review by David Marlow 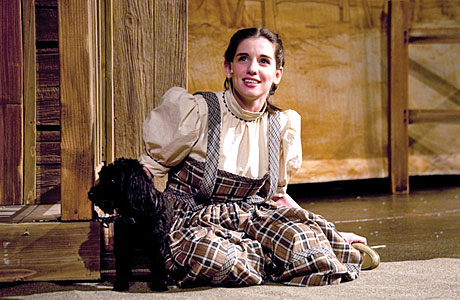 When Sara Grover opens her mouth to sing “Over the Rainbow” you will be over the moon. Ms. Grover is an absolute doll of a Dorothy. You will fall in love with her and her little dog, too.

However … Toto did steal one scene in which he ran offstage causing her to rush after him to search for him under the dining tables at which patrons were seated. It was one of those unforgettably charming moments that one only gets at live theatre and the squeals of delight from the children were priceless. Once Dorothy had him firmly in hand the show continued seamlessly.

Shortly thereafter Dorothy is swept up from her home in Kansas and transported to Oz by the astounding tornado acrobatically twirled and twisted by the very talented Jessica Hindsley and Matthew D. Peters. 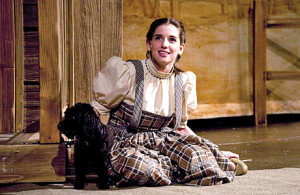 Sara Grover plays “Dorothy” in the theatrical presentation of “The Wizard of Oz,” now showing at the Boulder Dinner Theatre, through Aug. 31.
Photo by Glenn Ross

Seth Caikowski’s ferociously funny cowardly lion must have Bert Lahr rolling in his grave. Never has this reviewer seen such comic prowess (or should one say meow-ess?) His performance will have you roaring with laughter. Scott Beyette’s portrayal of the Scarecrow is indelible. His ability to perform the physiologically challenging acrobatics that give us the illusion that he is nothing more than a bag full of straw is phenomenal.

Bob Hoppe’s Tin Man is most memorable. Decked out in Ms. Morken’s awesome metallic armor Hoppe has never been better. His singing and dancing of “If I Only had a Heart” charms.

Barb Reeves cackles her way to glory with gleeful abandon as the Wicked Witch of the West. Tracy Warren’s Glinda glitters and shimmers adorned to her scintillating armpits in sparkling Good Witch sequins. Joanie Brosseau is superb in numerous roles including Nikko, the flying monkey. Wayne Kennedy turns in an Oz-some performance as The Great Oz and Professor Marvel.

As the Gatekeeper Brian Norber is one belly laugh after another. You won’t be able to keep your eyes off him as he leads his fellow Ozzians in the singing and dancing of the exhilarating “Merry Old Land of Oz.”

Alicia Dunfee’s topnotch direction and innovative choreography enhance this old warhorse with a freshness and verve that is exhilarating.

The set designed by Amy Campion dazzles and Linda Morken’s costume design is eye-popping throughout. The outrageously well-done wig design by Debbie Spaur adds a touch of Broadway that is sometimes missing in musicals in Colorado.

he inclusion of the Jitterbug scene that was cut from the movie enhances this show immeasurably.

Tickets for The Wizard of Oz are on sale now. Prices start at just $35, and include both the performance and dinner served by the stars of the show. All tickets for opening weekend (Saturday, May 18 – Sunday, May 19, 2013) are just $35. Group rate tickets and season subscriptions are available for all performances throughout the year. Call (303) 449-6000 or log on to www.bouldersdinnertheatre.com for reservations and/or additional details about the show.