The Kingston Trio, Live In Concert 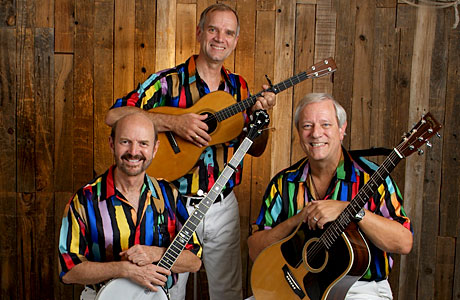 Denver, Colo. – As if time hadn’t passed, expect the great folk songs to come alive on stage, Saturday, April 26, 7 p.m. at the Paramount Theatre, when The Kingston Trio performs a Benefit concert for Colorado Public Television 12.

The Kingston Trio is one of the few groups today that has survived the many changes in the world of music.  They have remained consistent in their sound, which probably explains their resurgence in popularity over the last few years. 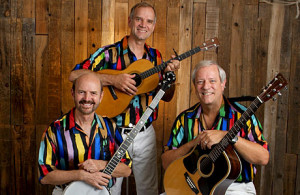 The Kingston Trio will perform live at the Paramount Theatre on April 26, 2014.

The original Kingston Trio was formed in 1957 by Bob Shane, Nick Reynolds and Dave Guard while the three were attending college in the San Francisco area.  Using only acoustic guitars and banjos, and singing simple yet memorable melodies, they revolutionized popular music, reawakening America to its own rich folk music heritage.  The release of Tom Dooley in October of 1958 began the “folk music revival” and set the stage for Bob Dylan, Joan Baez, Peter, Paul & Mary and the entire protest movement of the 60’s.  The Kingston Trio was the number one vocal group in the world, a musical and cultural phenomenon whose record sales and concert draws were matched only by The Beatles.

In 1961, after two Grammy awards and numerous gold records, Dave Guard left the group and John Stewart was introduced, maintaining The Trio for another six years.  In 1967, Bob, Nick and John disbanded The Trio to pursue individual careers.  “Pop music tastes were changing again,” says Shane: “that whole ‘rock revolution’ thing spread from San Francisco across the country, and took a lot of our audience with it.  But folk music is timeless, so I figured I might as well keep it alive.”  That’s exactly what Bob has been doing for 47 years.

In 1976, after working for 9 years as the New Kingston Trio with various members, Bob purchased the rights to the name “Kingston Trio,” and the group, which at the time consisted of Bob Shane, Bill Zorn and Roger Gambill, carried on.  Zorn had to leave shortly thereafter to fulfill a record-producing contract with his brother in England, and George Grove joined the group.

In 1985, the Kingston Trio lineup changed again, following the untimely death of Roger Gambill.  “We were devastated by the loss of Roger,” says George Grove, “but the Kingston Trio as a group is a musical institution that had to go on, just as it had (then) for 28 years.”  Bob Haworth then stepped in, but left in 1988 to pursue his solo career, and Nick Reynolds rejoined after a 21-year vacation.  In 1999, Nick retired again and Bob Haworth returned, forming the lineup that continued until March 2004.  In March 2004, Bob Shane retired due to medical reasons, and Bill Zorn returned to take his place.

In August 2005, Bobby Haworth left the group once again, and Rick Dougherty, formerly of the Limeliters, took over the spot.  The addition of Rick’s beautiful voice has made the current lineup the most vocally complete group since the original days.

The Kingston Trio’s trademark three-part harmony and clean, crisp sound keeps them touring 30 weeks out of the year.  George Grove’s orchestral arrangements allow The Trio to perform with symphony concerts, which have become a fan favorite.  The Trio’s busy touring schedule has resulted in an increasing number of new fans, both young and old.

As Bob Shane put it, “There is a tremendous demand for our type of acoustic music, and not just from those who remember The Kingston Trio.  All people want is for us to sing a song, tell a story, and make it good.”

They have been doing just that since 1957.