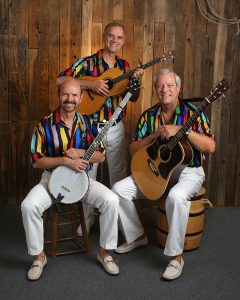 WHAT: THE KINGSTON TRIO were at the forefront of a folk music boom that produced Peter Paul and Mary, The Limelighters, The Smothers Brothers, and Bob Dylan. Three college students formed the TRIO in 1957: Bob Shane, Nick Reynolds, and Dave Guard, who began singing in coffeehouses in the San Francisco area. They soon gained national prominence and were signed with Capitol Records where they recorded their first single “Scarlet Ribbons.” Their recording of “Tom Dooley” has sold over 6 million copies. In 1959, THE KINGSTON TRIO received a Grammy Award as the “Best Country Music Group,” (there were no folk categories at that time).

THE TRIO disbanded in 1961 to pursue individual careers. They reunited in 1972 and recorded their first digital album “Aspen Gold,” a mixture of old and new songs, in 1979. In 1981, they returned to the studio to produce “25 Years Non-Stop,” a collection of their greatest hits. “Looking for Sunshine” was released in 1983.

Celebrating 60 years of music, THE KINGSTON TRIO, consisting of George Grove, Bill Zorn and Rick Dougherty, is one of the few groups today that has survived the many changes in the world of music.

This concert is a benefit for Colorado Public Television 12 and is sponsored by Cruisin 1430, AARP, Grand Hyatt Denver, The Gazette, Prime Time for Seniors, 50+ Marketplace News, Marlowe’s and Hermes Private Car.