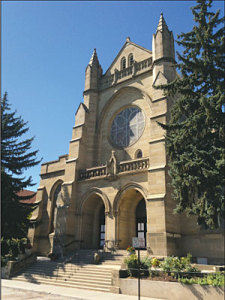 St. Dominic’s in northwest Denver celebrates 125 years as a parish this autumn. That’s a big deal, but it’s the next 125 years and in particu­lar the next decade or so that pastor Father Ed Ruane, O.P., is excited about.

Both the parish and the Dominicans’ superiors at St. Albert’s Do­minican Province in Chicago have fretted over St. Dominic’s future, landlocked as it is by Federal Blvd., W. 29th Ave. and a well-established residential neighborhood. The parish seemed to have few options to better serve its growing numbers of young families, the popular neigh­borhood and also the novitiate, which serves the entire Midwestern province.

“But gradually we’ve been buying some property,” says Father Ru­ane.

The province, headquartered in Chicago, also intends to build hous­ing for the Dominican community, combining the novitiate and rec­tory into one larger unit. Community is key to the Dominican charism, meaning that Dominicans don’t live solitary lives but rather in commu­nity, three at the minimum but ideally six or more.

The new novitiate, in turn, will allow what is now a shared par­ish center and novitiate to become a true parish center, far more user friendly as it absorbs the parish offices that are in yet another building.

One telling improvement is already in place: St. Dominic’s new paro­chial vicar, Father Luke Barder, O.P., convinced the finance committee to install a bike rack for parishioners. “I thought bikes were just for kids but Father Luke assures me that they’re for everyone,” Father Ruane jokes.

Father Ruane recruited the newly ordained Father Barder, 31, in part to better reach out to young Catholics and grow the 600-household par­ish.
The two priests hope the improvements to the parish’s physical plant will renew the Dominican parish’s apostolic missions of preaching, ministry and prayer, including to fallen-away Catholics and non-Catho­lics in the area.

St. Dominic’s, which faces North High School across Federal Blvd. and Viking Park, is one of Denver’s most identifiable churches. Its inte­rior, under an 80-foot ceiling with groined arches, is just as striking as its exterior. “The building evokes the power of God,” says Father Luke.

She and other parishioners say the decision against stained glass is a conscious choice in favor of spending that money to serve the poor. The parish has a strong tradition in the Church’s social justice teach­ings—Project Salvador began here in 1986.

Bramming, a parishioner here since 1980, says that part of the reason she loves St. Dominic’s is because it reminds her of the little mission church in Eastlake, Colo., where she grew up. “People stand around and chat after Mass,” she says. “When someone’s not there people notice and try to find out what’s wrong.”

She had moved to the Highlands neighborhood because she wanted to live in a diverse neighborhood and worship at a parish that wel­comed diversity. St. Dominic’s had begun its Spanish Mass in 1978, one of the first in the city, and Spanish-speaking Catholics traveled long distances to come to the parish. They still do.

Bramming has seen many changes over the years. The school closed in 1973 and for a while people in the pews were noticeably graying. Then, around 2000, the Millennium Bridge, Platte River Bridge and the Highland Bridge opened, meaning that Highlands was suddenly closer to downtown. Redevelopment brought density and attracted younger families.

And the future? “We’ve got good music and excellent preaching,” says Bramming. “Now we need to grow a better religious education program. There’s a great group of young people who are hungering for God, and I hope we continue to draw more of them here.”

Kristen Hannum is a freelance writer who contributes to U.S. Catholic, Colorado Country Life and other publications. She’s a parishioner at St. Dominic’s.