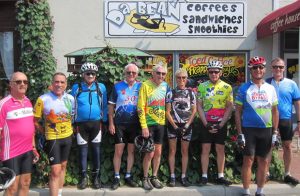 Boulder Walk and Bike Month, celebrating its 40th anniversary this June, will host more than 60 events this year. And back again, Seniors on Bikes—or SOBs as they call themselves—will host a number of social rides that will begin in Boulder and travel country roads to reach destinations such as Loveland, Berthoud, and Lyons.

The SOBs formed in 1984 as an off-shoot of a ski group and they’ve been riding ever since. Many of the SOB riders are regulars, but being that the group is relaxed and social, they welcome new riders who have the skill and endurance to join the group during Walk and Bike Month and beyond.

While they are planning weekly rides during Boulder’ Walk and Bike Month in June, you’ll find the SOBs out year-round—through the cold, the heat and the occasional, spontaneous rainstorm.

They have several self-formed groups to help match riders to ability: The Tigers (don’t ride with them unless you mean business) are a little frisky and the Pacers (they’re pretty serious too) are for more experienced riders. The Cruisers and the Easy Riders take the most leisurely rides.

The group earned its name after a stranger approached some of the riders and said, “Looks like you’re a bunch of SOBs!… You know, Seniors on Bikes!” Made up of female and male riders from 50s to 70s, the group has no official dues or membership.

Learn more about Boulder Walk and Bike Month and the SOB rides at www.walkandbikemonth.org.