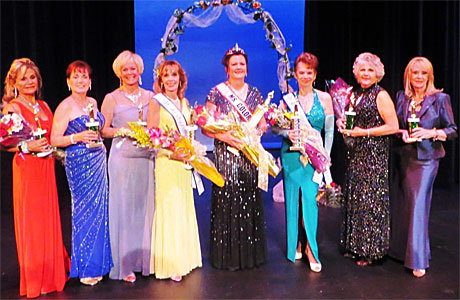 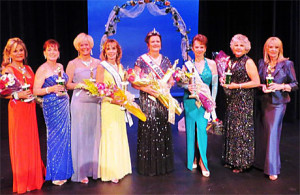 Congratulations to Sharon Nuanes, who captured the title of Ms. Colorado Senior America 2014 on June 28th at the MCSA 2014 “Golden Moments” Pageant.  This marked its 20th Anniversary since holding the first annual pageant in 1994.  It was held at the Performing Arts Complex at Pinnacle Charter School in Denver.  What a highly entertaining show to remember – opening with the presentation of the colors by The Buckley Field Young Marines, followed by “God Bless America” sung by MCSA 2012 and CO Cameo Club Pres. Debbie Buczkowski, who co-emceed the event with Michelle Rahn, former Ms. Senior America 2004.

The audience had a bit of a surprise when Colorado Cameo Club’s ‘Golden Ladies’ gave a little taste of Broadway in their opening number with some of their performers rising from seats in the audience to join in the number.  The crowd watched as many of MCSA’s past queens lit up the stage, and then were treated to the famous pageant tambourine routine performed to “Maple Leaf Rag” by the Colorado Ragtimers.  Following her farewell speech, 2013 queen Gail Hamilton did her final walk, and then enamored the audience once again with her performance of “Nessun Dorma,” before the crowning of Ms. Nuanes. Colorado Cameo Club is to be commended for such a fabulous pageant resulting from its committees’ total collaboration, as well as from Carol Swanson’s great organizational skills which highly contributed to the successful stage production this year.

MCSA 2014, Ms. Sharon Nuanes worked 38 years for the Bureau of Reclamation as a Dam Engineer. Now retired she dances, is a seamstress and plays with her beautiful and brilliant grandchildren, while continuing to use her talents as a magician. She met her husband Richard while volunteering for the Jerry Lewis Telethon.  Sharon was Denver’s first female volunteer firefighter in 1974, and while working with the Bureau of Reclamation she was detailed to FEMA 9 times to work on declared national disasters, hurricanes and flooding.   She received the Civilian Distinguished Medal of Honor for her work on Hurricane Fran.  Sharon is currently an instructor with the Civilian Emergency Response Team.  And recently she competed in the Rocky Mountain Senior Games in dance and took home the Gold.   Her pageant performance was a very impressive and professional Magic act.  In October she will fly to Atlantic City, New Jersey, to compete against the other state queens for the national title of Ms. Senior America in its Pageant to be held at the Resorts Hotel on the infamous Boardwalk.

The entire pageant did not fail to deliver an afternoon of elegance and showmanship by all of the contestants, Sharon Nuanes, Claudette Erek, Karen Osborn, Marilyn Litman, Camella Landrum, Yvonne Zebauers, Diane McKnight Page, and Marta Leoni.  They are now members of the Colorado Cameo Club and will continue to use their talents to perform at venues in the Denver area. Congratulations to Sharon Nuanes and we wish her well in Atlantic City!

Colorado Cameo Club, Inc. / Ms. Colorado Senior America Pageant, are non-profit 501(c)3 organizations comprised of a large genre of entertainers who   perform throughout the year at nursing homes, VA hospitals and other community and charitable organizations. Our group is available for special events by appointment.