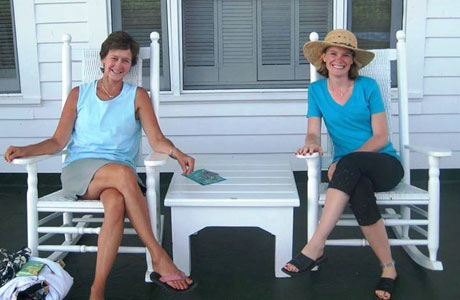 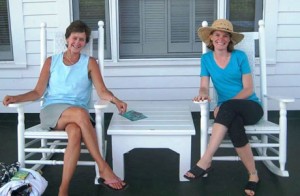 DENVER, Colo. – If you see Mindy Hanson any day during September, you will find her wearing something teal. Not because it is her favorite color; the Colorado wife and mother is just committed to doing anything she can to increase awareness of ovarian cancer, the fifth most common cancer in females in the United States and the deadliest gynecologic cancer.

September is observed nationally as Ovarian Cancer Awareness Month and September 4 is Wear Teal Day, according to Patrice Hauptman, executive director of the Colorado Ovarian Cancer Alliance (COCA). Hanson, who acknowledges that friends give her items to add to her teal wardrobe, will be more than ready that Friday to join ovarian cancer survivors, their family members, friends and co-workers in wearing teal, the color associated with ovarian cancer, to increase knowledge about the disease.

“I wore teal every day in September 2014 and I plan to do so again this year,” Hanson said. When someone would comment about her teal attire, she would hand that person a card listing the most common symptoms of ovarian cancer, which are bloating, pelvic or abdominal pain, difficulty eating or feeling full quickly, and urinary urgency or frequency. She handed out cards daily, often in stores and other public places, distributing more than 100 during the month.

“On an airplane, I handed a card to a flight attendant,” Hanson recalled. “Later, she stopped and said, ‘Thank you. I’m making a doctor’s appointment as soon as I get home.’” While Hanson doesn’t know the results of that day’s interaction, she noted, “You never know whose life you might save.”

Hanson said she did not know the most frequent indicators of ovarian cancer prior to February 2012, when her mother, Carol Bieging, went to the emergency room experiencing severe abdominal pains. Doctors found two tumors, one on her ovary and another on her spleen. Bieging’s diagnosis of Stage 3C ovarian cancer was followed by surgery and multiple kinds of chemotherapy. Over the next two years, Bieging’s CA-125 numbers, which are used to monitor certain cancers during and after treatment, would go down for a while and then back up. Surgery in April 2014 revealed Beiging’s abdomen was encased with cancer and on May 1 she passed away.

“My mother was one of the healthiest people I know,” Hanson stated. “She ate well, exercised, never smoked and took good care of herself. If ovarian cancer could get her, it could get anyone.” One out of 72 Colorado women will develop invasive ovarian cancer in their lifetime.

During her mother’s battle with ovarian cancer, Hanson and her father attended caregiver support groups hosted by the Colorado Ovarian Cancer Alliance, learning about resources and treatment options and talking with others dealing with similar situations.

“It was a huge support for him and helped me a great deal personally,” Hanson said. “It was comforting to know that we weren’t the only ones out there.”

Since then, Hanson has volunteered at COCA events and participated with family members and friends in the 2014 Jodi’s Race for Awareness, the nonprofit’s annual fundraiser. During that event, Hanson’s son, Rhys, was acknowledged for his personal contribution to the Colorado organization, whose mission is to promote awareness and early detection of ovarian cancer through advocacy and education and provide support to people affected by ovarian cancer.

Shortly after his grandmother’s ovarian cancer diagnosis, seven-year-old Rhys Hanson said, “Mom, I have to do something so nobody’s family has to be scared and sad about cancer.” He designed a set of notecards, which he sold everywhere – even while in line at the supermarket – to raise money for COCA. “We had the notecards reprinted three times because they kept selling out,” his proud mother stated.

Hanson said her mother’s passing was devastating for her young son. “They spent every Friday together and travelled together. They were two peas in a pod. Their last shared activity was packing school supplies for children in Africa.”

Hanson knows that the most common indicators of ovarian cancer are symptoms women often experience, which are frequently chalked up to other causes such as stress, overwork or irritable bowel syndrome. “We’re so busy caretaking for others that we overlook things going on in our own body, and we don’t realize how severe it can really be,” she said.

Since there is no screening test for ovarian cancer, and an annual gynecological exam does not check for this cancer, early detection of these symptoms is critical to saving lives. Hanson encourages women to talk with their friends and family about gynecologic cancers, which seem to be a taboo subject for many people. She believes that avoiding such discussions can cost lives. Any symptom that persists for more than two weeks in any given month should be reported to a doctor, preferably a gynecologist.

“I do everything I can do, and I wish I could do more, even if I can help just one person,” Hanson admitted. “I’ve learned you have to savor every minute and make the best of the time you are given.”

To learn more about COCA and its programs, visit www.colo-ovariancancer.org.