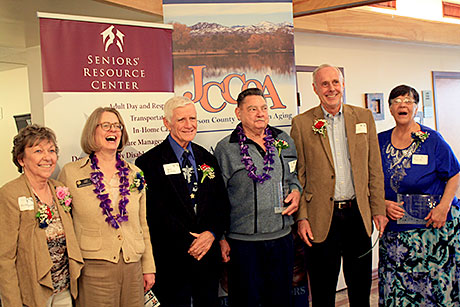 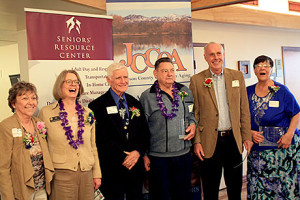 In 2013, 20 million older adults in the United States volunteered nearly 3 billion hours of time to various causes at a value of $67 billion dollars. That’s pretty impressive! Most of these efforts are given quietly and without fanfare. Many wonderful and dedicated older adult volunteers are giving their time in Jefferson County to schools, hospitals, faith communities, law enforcement agencies, cities, and so many other endeavors.

Each year the Jefferson County Council on Aging and the Seniors’ Resource Center takes the opportunity to shine the spotlight on a few special senior volunteers by recognizing their efforts at the Senior Heroes Awards Ceremony. On Thursday May 8, 2014 at Mountain Vista Community seven seniors received awards for all their hours they have spent helping others.

Here are the seven award honorees.

Bill Braun a retired US Army Colonel, Bill continues to serve his community in Evergreen through Evergreen Christian Outreach (ECHO). For the past 10 years he has given over 140 hours per month volunteering at ECHO. At ECHO, Bill has spent his time in the Resale Shop, the food bank, and the clothing bank. His most recent project has been the ECHO Jobs Program where he helped develop and support the project. At age 72, Bill also volunteers with the Blue Spruce Habitat for Humanity, A Home Evergreen, and his church.

Roxie Davis – Crisis Intervention and support of children who have been abused takes a very special Volunteer. Roxie has the compassion, trustworthiness and insight to relate with children, engaging them in conversation and making them feel comfortable. At age 65, Roxie can always be counted on by the staff at Ralston House in Arvada. They truly appreciate the intergenerational opportunity Roxie brings to the children and their families.

Roland Lei – For over nine years, this retired Marine from Arvada has been a “God Sent” asset to the inmates at the Jefferson County Detention Center. As A volunteer Chaplain, Roland, age 73, is faithful and eager to serve the inmates through personal and spiritual counseling, distribution of materials and prayer. Detention Center Chaplain Fr. Fennis Garrous truly appreciates Roland’s willingness to assist with the numerous duties in the Chaplain’s

Rosalyn Lemon – Rosalyn doesn’t let her age of 77 stand in her way when it comes to community volunteering. The team at Golden Visitor’s Center feels especially grateful since Rosalyn has served for 10 years and at times gave over 200 hours per month. Rosalyn also volunteers at the City of Golden Museum, The Foohills Art center, American Legion Post 21, the Farmers Market and much more.

Helen Nopens – The Jefferson County Division of  Children, Youth and Families is so appreciative of the competence, consistency, reliability and professionalism of Helen, age 68, that they consider her one of the staff. She is “so deserving of the recognition because Helen would never ask for it or think that she is deservingÉshe has a spirit of a true volunteer”.

Margaret Weakly – Since 1988, Margaret has volunteered thousands of hours to assist the residents at Villa Manor Care Center in Lakewood. Her timeless effort to provide a superior quality of life to the seniors truly her passion and commitment. Helen, age 68, never says “no” to the residents and always goes the extra mile to bring a ray of love and hope to the people she deeply cares for. Margaret Weakly is always there for them!

Thank you to our seniors for all you do! We appreciate all of you!