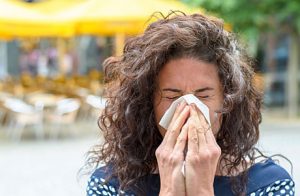 Soon the pine pollen will be coating the cars in the morning. Certain individuals among us will greet the pollen with fits of sneezing, runny nose and itchy, watery eyes. Then there are those who do well until August when the grasses dry out and the wind starts blowing. Both of these scenarios define seasonal allergic rhinitis and allergic conjunctivitis. Some less than lucky individuals will react to both pollens and grasses!

Fortunately, the first line treatments are now all available as inexpensive generics that are available over the counter. For those with only occasional eye and sinus symptoms, an antihistamine is all that may be needed. Of the common antihistamines, Claritin (loratadine) and Allegra (fexofenadine) are less sedating, while Zyrtec (cetirizine) is stronger but is more sedating. Most of the older antihistamines such as Benadryl are no longer used due to a high incidence of sedation. For those only experiencing eye allergies, antihistamine eye drops work well. The “get the red out” drops should be avoided for long term use as they result in rebound redness similar to certain nasal sprays causing rebound congestion.

When symptoms occur on a daily basis, suppressing the allergic response works better than just treating the symptoms with an antihistamine. The most effective medications for this are the nasal steroid sprays, such as Flonase (fluticasone). After a couple of weeks of use, both nasal and eye symptoms usually are much improved, although antihistamines can still be used for breakthrough symptoms. When the OTC’s aren’t strong enough, there are prescription medications available. Also, now available are allergy “desensitization” drops given under the tongue once daily which appear to be as effective as the older allergy shots. Inflammation from allergies can ruin the summer and cause fatigue in addition to the above symptoms so the key message is take action, not refuge!