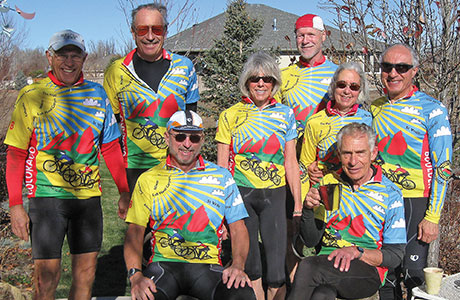 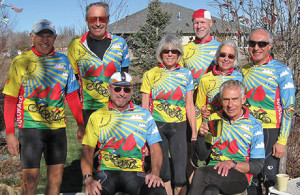 Bill Rawsky has been biking for nearly 40 years, and is not about to let anything like advancing age stop him. And he’s not alone – they call themselves Seniors on Bikes and they are going to spend the month of June encouraging others to bike as well as part of Boulder’s Walk & Bike Month.

But while they are planning weekly rides during June, you’ll find the Seniors on Bikes out year-round – through the cold, the heat and the occasional, spontaneous rainstorm.

There are the Tigers (don’t ride with them unless you mean business) and the Pacers (they’re pretty serious too), along with the Cruisers and the Easy Riders, who usually take the most leisurely rides.

The group, previously known as the Old Wheelers, got their name after a stranger approached some of the riders one day and said, “Looks like you’re a bunch of SOBs!… You know, Seniors on Bikes!” And the name stuck.

They formed in 1984 as an off-shoot of a ski group and they’ve been riding ever since.

The Tigers typically ride about 40 miles at average speeds of 18 to 20 miles per hour, while on the other end, the Easy Riders go about half that pace for much shorter distances. In between, the Pacers go about 30 to 50 miles, while Cruisers go about 20 to 30 miles, neither group exceeding about 15 miles per hour.

Rawsky said the number of riders typically varies between six to two dozen. He himself has been riding with the group for about eight years.

Made up of riders mainly between their 60s and 70s, the group has no official dues or membership. The only requirement, Rawsky joked, is that anyone over 100 has to have a doctor’s note.

Their rides during Walk & Bike Month include a tour around Crater Lake, a ride to Loveland, and a jaunt through Louisville.

If you’re interested in joining in, you can find a full schedule of their planned Walk & Bike Month rides at www.walkandbikemonth.org.