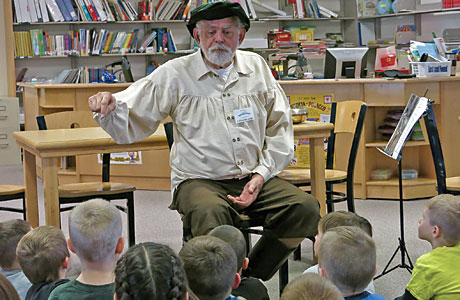 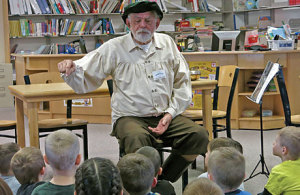 John Turek (a.k.a. Little Big John), 79, is a Spellbinders Storyteller.

The Spellbinders love seniors. They are an organization that trains and places volunteer storytellers inside schools.  Through the art of oral storytelling, seniors boost literacy, redefine “Elderhood” and build community. They help children with vocabulary, story structure, imagination and literacy.  In the case of Little Big John, the children learn history.

He sits on a tall stool, uses a gentle voice, and keeps a stand next to him with pictures and his prompts. John does not talk a history from complicated books. He tells a real story with names and faces. This is a story about his father. This story begins with the Eastland Tragedy.

The Eastland Tragedy, July 24, 1915 is the largest non-war maritime disaster in the United States. Most of us have never heard of it. Some of us don’t know what maritime means so John teaches. People remember the Titanic. They forget it was British. The S.S. Eastland sailed in rivers and on the Great Lakes as a touring ship. The Eastland tipped over close to a peer in Chicago. There were lots of witnesses. Folks tried to help. Still, over eight hundred people died. They were mostly immigrants and no famous people were on board.

At the age of three because of this tragedy John’s father was left an orphan. He lost his mother, father, and three sisters. He had no other family.

Because he had no other family he was taken to an orphanage. At this orphanage, children of all ages were kept together with little supervision. The children lived in poverty. They had no schooling. They had no one to love him or her. Many did not survive. John uses his gentle voice and pictures to help children struggle through this very real place. He explains child labor, desperation, boredom, fear and the cost of ignorance. He helps people imagine his father in just such a place about a hundred years ago. Since his son is telling the story you realize it wasn’t so long ago.

John’s father was confused when at the age of twelve he was awakened early in the morning. He was given a blanket and a p.b.j. sandwich. He was put on a horse drawn wagon. He met a train. No one told him where he was going or why. He was scared. He arrived at the station. He stared at a big locomotive with children looking out the windows. John hands out another picture.

You learn the trains run when the orphanages get too full and resources too slim. They run from 1893 to the last one in 1935. Through the years they carried about 250,000 children.

He talks about how his father felt being ordered onto a platform at each small town. You had to stand by the train while strangers look you over. You watch and see who says, “You, come home with me.” You don’t know these people and you may never see your friends or sister or brother again.  John teaches you the Orphan Trains were filled with good stories and bad stories.

But, this is his fathers’ story. His father went through three homes. The first two were not good and he was sent back. But the final place, “That was a very good family with very good people.” Little Big John smiles.

You want to cheer and the children do. That is the art of storytelling. There are many styles of telling from sitting quietly in a chair to banging on drums and dancing about. There are many kinds of stories from fantastical to historical, fiction to factual.  Little Big John tells a story about real people with real history. He is real when he sits in front of you. That is what Spellbinder Storytellers’ do. They tell stories. They teach all ages about having a voice and about how to listen. This is not learning from a cold hard screen or a brittle page from a book. This teaching lives, breathes, speaks, and touches.