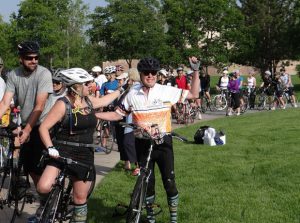 Spring is here, which means it’s bicycling season in Colorado. On Saturday, June 24, hundreds of cyclists and their supporters will gather in Lone Tree’s Sweetwater Park for the eighth annual Pedaling 4 Parkinson’s charity ride and expo. “P4P” gives 100% of the money raised to The Michael J. Fox Foundation for Parkinson’s Research, and provides an opportunity for many to join the fight against this devastating disease. Since the first ride in 2010, P4P has raised over $250,000 to support people living with Parkinson’s and those searching for a cure.

Started by three Denver area women whose lives have been affected by Parkinson’s disease, Pedaling 4 Parkinson’s is quickly becoming a favorite ride for both serious and not-so-serious cyclists. “A lot of our riders are not hard-core cyclists,” said Laura Fiske, P4P’s president, “but they ride to support a family member with Parkinson’s.” Cyclists this year can choose among three routes: ten, forty, or sixty miles. Moreover, the expo has lots to offer the dozens of non-cyclists, with sponsors’ exhibits, food, live music and other activities for all ages. 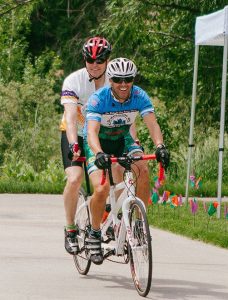 Parkinson’s disease affects over one million people nationwide, and around 17,000 here in Colorado. Recent research has shown that cycling can have some amazing benefits for people with Parkinson’s, including reduced symptoms and a slower rate of progression. Increasing awareness of those benefits is an important goal of Pedaling 4 Parkinson’s.

The Michael J. Fox Foundation has had an enormously positive influence on research and treatments for Parkinson’s disease, having raised over $700 million since 2000. Moreover, because of the relationship with the Foundation, 100% of the money raised by P4P cyclists goes straight to research. A representative from the Fox Foundation will also attend this year, with information about their work and Parkinson’s disease. 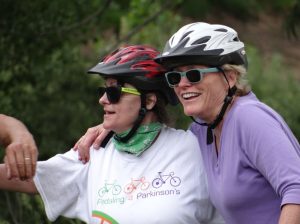 For many people with Parkinson’s, cycling more than short distances can be very difficult. To enable them to participate in P4P, the “Tandem Bike Project” was introduced a few years ago. This initiative pairs a strong “captain” on the front of a tandem bike, with a person with Parkinson’s on the back. For people with PD who thought their cycling days were over, the Tandem Bike Project gives them an opportunity to join the fight against the disease they deal with every day. And in keeping with the goal to support these people, they ride for free.

Each P4P cyclist commits to raise $150 for PD research, but many greatly exceed that goal. The entire event and organization is run by volunteers, and supported by generous sponsors. For anyone interested in riding, volunteering, sponsoring, or just attending the expo to show your support, more information can be found at www.Pedaling4Parkinsons.org.