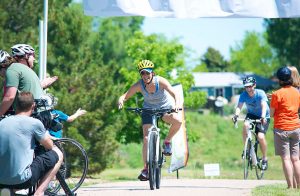 LONE TREE, CO – Organizers of the sixth annual Pedaling 4 Parkinson’s bike ride, on Saturday, June 11. 2016, announce our second year at Sweetwater Park in Lone Tree, Colorado and one new route raising the options to four routes: a Century Ride (100 miles), Metric Century (62 miles), 37 and 10 Mile Ride. The ride draws hundreds of riders every year, from expert cyclists to novices – all united in the fight to find a cure for Parkinson’s Disease. The ride is the largest fundraiser in Colorado benefiting the Michael J. Fox Foundation for Parkinson’s Research.

The Tandem Bike Project, a part of the P4P event, is an opportunity for people with Parkinson’s Disease to participate in the Metric Century ride even though they might be unable to do so on their own. People with Parkinson’s Disease ride as “stokers” on the back of a tandem bike with a “captain” in front. Tandem cyclists can choose to ride all or part of the Metric route. The Tandem Bike Project is made possible in part by da Vinci Designs of Denver, Eyecycle Colorado, and The Natural Way Racing Team. 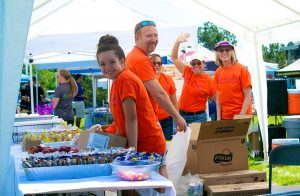 “Research has shown that cycling, especially at higher RPM’s, helps manage and reduce disease symptoms, so it’s a perfect opportunity for riders with Parkinson’s Disease to participate in a greater way than they could on their own,” said Laura Fiske, President of 3 4 Fighting Parkinson’s, organizers of the ride.

Money raised by riders goes to the Michael J. Fox Foundation. “Our loyal riders, sponsors and volunteers have helped raise more than $200,000 to date to help find a cure for Parkinson’s disease,” Fiske said.

Expo and Sponsorship Packages Available
Expo and sponsorship packages for Pedaling 4 Parkinson’s are still available. The ride starts at 7:00 a.m. and the Expo at Sweetwater Park will be open from 8:00 a.m. to 6:00 p.m. Riders will cross the finish line and be treated to lunch, beer garden, live music, sponsor booths, and plenty of family friendly activities.