“I have no money. I don’t even have a savings account cause I don’t know my mother’s maiden name and apparently that’s the key to whole thing.”
Paula Poundstone 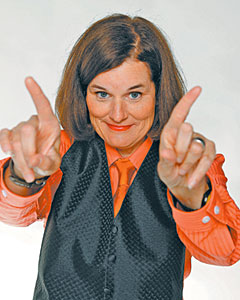 WHAT: Stand-up comedienne Paula Poundstone comes to Denver to put her own unique spin on life in a special benefit for public television station CPT12. She averages 45 weeks on the road a year with appearances at concert venues and colleges across the country. Because of her improvisational approach and her ability to relate to the audience, each show is an experience unto itself — no two are alike.

WHERE: The Paramount Theatre

32 years ago Paula Poundstone climbed on a Greyhound bus and traveled across the country — stopping in at open mic nights at comedy clubs as she went.  A high school drop-out, she went on to become one of the great humorists of our time. You can hear her through your laughter as a regular panelist on NPR’s popular rascal of a weekly news quiz show, Wait WaitÉDon’t Tell Me.  She tours regularly, performing standup comedy across the country, causing Bob Zany with the Boston Globe to write: “Poundstone can regale an audience for several hours with her distinctive brand of wry, intelligent and witty comedy.”  Audience members may put it a little less elegantly:  “I peed my pants.”

While there is no doubt that Poundstone is funny, the thing that separates her from the pack of comics working today and that has made her a legend among comics and audiences alike is her ability to be spontaneous with a crowd.  Poundstone says:  “No two shows I do are the same. It’s not that I don’t repeat material. I do. My shows, when they’re good, and I like to think they often are, are like a cocktail party. When you first get there, you talk about how badly you got lost and how hard it was to find parking. Then you tell a story about your kids or what you just saw on the news. You meet some new people and ask them about themselves.  Then, someone says, “Tell that story you used to tell,” and then someone on the other side of the room spills a drink, and you mock them.  No one ever applauds me when I leave a party, though. I think they high five.”

Paula’s interchanges with the audience are never mean or done at a person’s expense. She even manages to handle politics without provoking the pall of disapproval less artful comics have received.

Paula’s touring schedule is rigorous.  She performs an average of 75 dates per year, mostly in Performing Arts Centers and Theatres.  For those who don’t have a chance to see her live, they can listen to her brilliance on her CD’s or read her in print:  Her newest comedy CD, I HEART JOKES: Paula Tells Them in Boston was recorded during a performance at the historic Wilbur Theatre in the heart of the city and released on April Fool’s Day 2013. It follows her first CD, I HEART JOKES: Paula Tells Them in Maine (November 2007), recorded at the world-famous Stone Mt. Arts Center in none-other than, Maine! Both are available for sale thru Paula’s website at www.paulapoundstone.com, on Amazon, CDbaby, Itunes, and if you are there, at Paula’s shows!  Paula is also an accomplished writer.  Her first hard cover book, There is Nothing In This Book That I Meant To Say, with a forward by Mary Tyler Moore, was published in 2006 by Harmony Books, a division of Random House. It is still in release on audio (Highbridge) and in paperback.  Paula is hard at work on her second book, this one for Algonquin Press.

Wait WaitÉDon’t Tell Me is now the most popular show on NPR, having reached #1 status in 2014.  Listeners can test their knowledge against some of the best and brightest in the news and entertainment world while figuring out what’s real news and what’s made up.  Paula quickly goes on record about how much she loves being part of the show saying: “I am a proud member of the endorphin production industry.  They allow me to say whatever I want on Wait, WaitÉDon’t Tell Me.  The panelists are unscripted, so it’s perfect for me. I feel like I’m a batter in a batting cage. I get lobbed topics. Sometimes I just watch them go by, but every now and then I get a piece of one. If the others didn’t cheat, it would be an almost perfect work experience.”  The show is also heard internationally on NPR Worldwide and on the Internet via podcast.  In May 2013 the show was Cinecast to movie theatres across the country.  Paula was on the show, as was Steve Martin.

Paula recently did commentary on CBS Sunday Morning.  Her editorial pieces can be heard on NPR’s All Things Considered.   An avid reader, Paula signed on as the National Spokesperson for the American Library Association’s (ALA) United for Libraries in 2008 – a role she continues to this day!  United for Libraries is a national citizen’s support group that works to raise funds and awareness for their local libraries.  Said Paula, when she was chosen, “It’s funny that we think of libraries as quiet demure places where we are shushed by dusty, bun-balancing, bespectacled women.  The truth is libraries are raucous clubhouses for free speech, controversy and community. Librarians have stood up to the Patriot Act, sat down with noisy toddlers and reached out to illiterate adults. Libraries can never be shushed.”   As part of her duties, Paula recorded a public service announcement for United for Libraries and helps raise funds.  For the last four years she has also been the headline panelist at the ALA’s annual conference for their “Laughs On Us” panel of writers.  To quote Sally Reed, the ALA Nat’l Director:  “…you’d have to come to one of these events to see how adored Paula is by librarians.  We love her and it’s never repetitive.”
Paula’s incredible spontaneous humor is the perfect fit for the voracious appetite of the social networks:
Follow her on:   Twitter@twitter.com/paulapoundstone;
Facebook:  facebook.com/PaulaPoundstone.
And enjoy her website: www.paulapoundstone.com

Paula grew up in Sudbury, Massachusetts, and began performing at open-mic nights in 1979.  Over the span of her career, she has amassed a list of awards and accolades that stretch the length of a great big tall guy’s arm. She not only shot through the glass ceiling, she never acknowledged it was there.   She was never one to stereotype herself as a Ôfemale comedian’ or limit herself to comedy from a Ôfemale’ point of view.  In the early 90’s she was the first woman to win the cable ACE for Best Standup Comedy Special and the first woman to be invited to perform standup at the prestigious White House Correspondents dinner where she joined the current President as part of the evening’s entertainment.  Paula starred in a self-titled series for HBO in ’93 (for which she won her second Cable ACE Award for Best Program Interviewer) and moved the show to ABC which was short-lived, but applauded for its break from convention. Paula had her own comedy specials on HBO and BRAVO.  In fact, she starred in several comedy specials on HBO, including “Paula Poundstone Goes to Harvard,” the only time the elite university has allowed their name to be used in the title of a television show. If it means anything to anyone, Paula is recognized as one of Comedy Central’s 100 greatest stand-ups of all time.  She won an American Comedy Award for Best Female Standup Comic, and in 2010 she was one of a select group voted into the Comedy Hall of Fame.

Late-night America roared when Paula served as “official correspondent” for The Tonight Show during the 1992 Presidential race.  This was followed by her extremely successful backstage commentary during the 1993 Emmy telecast. She has made numerous appearances on all the late night talk shows, including David Letterman, and a regular stint with Craig Ferguson.  She has also appeared on The Today Show, Good Morning America, and guested several times on Garrison Keillor’s A Prairie Home Companion.  In 2000, when a syndicated version of the popular game show To Tell The Truth came calling for Paula to be one of the panelists, she found another perfect showcase for her razor-sharp humor and spontaneous wit.

Beginning in 1997, Paula voiced the character of Judge Stone on the acclaimed ABC-TV Saturday morning animated series Science Court (a.k.a. “Squigglevision”) for three years. In 1999 (the premiere season) she added to her repertoire the voice of the Mom, ÔPaula’ in what is still considered a renowned cult show, Home Movies (UPN and The Cartoon Network).  Paula guest starred on the CBS series Cybill, which led to a recurring role during the show’s final season, and also appeared on PBS favorites such as Sesame Street and Storytime. She won a local Emmy Award for her field pieces on the erudite “Life & Times” for PBS station KCET.  She appeared on several network television specials including A Salute to The President from Fords Theatre on ABC when President Clinton was in office, and performed on every Comic Relief Special on HBO.  These specials were heralded for the hundreds of thousands of dollars raised for the homeless and the lineup of stars.  Paula has also enjoyed success as a Host of many events, including the Art Directors Guild Awards, an unprecedented 4 times,

Logically Paula is almost always included in any compendium – be it film, television or print, noting comedic influences of the 20th/21st century.  They include Why We Laugh Too: Women of Comedy (Lions Gate feature-length documentary, Showtime, 2013); We Killed: The Rise of Women in American Comedy (Sarah Crichton Books, 2012.) One of Paula’s quotes is even included in a new beautifully illustrated coffee table book on cats alongside quotes by notable authors and artists including W. H. Auden, Mark Twain, and Henry David Thoreau (Chronicle Books, 2015).