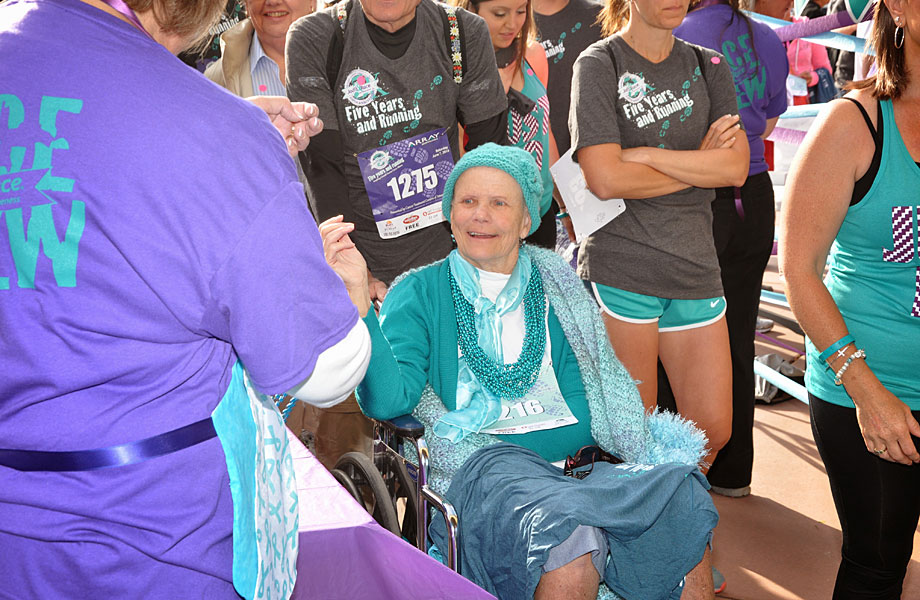 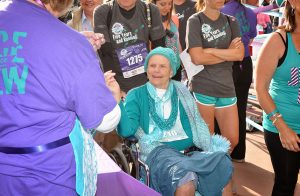 DENVER, Colo. – At age 75, Joan Shrimpton has been dealing with cancer for well more than half her life. Fortunately for Shrimpton and others battling gynecologic cancers, the support available to them has improved vastly during that time. More than 20 years ago, when Joan was diagnosed with ovarian cancer, information on the disease was scarce. Today, as a survivor of both breast and ovarian cancer, Joan finds the vast array of health and emotional resources offered by the nonprofit Colorado Ovarian Cancer Alliance (COCA) invaluable.

Following her initial two diagnoses with breast cancer and during the early years after her ovarian cancer diagnosis, Joan battled alone supported only by her family and friends. Then, after moving to Colorado in 1996, she came across an ovarian cancer support group that eventually became the foundation of COCA. The connections she formed thru COCA changed her life, turning her into an advocate and inspiration for others. Today, Joan views her life’s work as an opportunity to show others you can live a full life after a cancer diagnosis. “I have had many people tell me that I am an inspiration to them,” said Joan. Part of her full life is putting events like the annual Jodi’s Race for Awareness (www.jodisrace.org), happening on Saturday, June 9 at Denver’s City Park, on her calendar…and then showing up.

It was in 1970, at the age of 27, that Joan began her lifelong battle with cancer. “I went in to have a cyst removed and when I woke up they had taken my breast off,” said Joan of her first battle with cancer. While she was still under anesthesia, tests determined the cyst to be cancerous, requiring the removal of the breast.

Joan’s next brush with cancer came 12 years later when she received yet another diagnosis of breast cancer. Then, at age 52, she was diagnosed with ovarian cancer following a CA125 blood test. Her treatment plan included surgery and four months of chemotherapy.

Now at age 75, Joan is feeling good but remains on a long-term maintenance program that includes a twice-daily oral chemotherapy dose and visits to her doctor every two months. Joan credits the support group she joined in 1997, Nicki’s Circle, with keeping her strong. COCA facilitates the group, which she says is an excellent sharing opportunity, “We share our grief, we share our knowledge and we share our excitement,” Joan commented.

Joan participated in the inaugural Jodi’s Race in 2010, which was designed to raise awareness of the signs and symptoms of ovarian cancer and generate funds to support COCA programs, and has been inspired by its continual growth and support. “I did the first Jodi’s Race and have participated in a number of them since – sometimes in a wheelchair,” she said. “Nowadays, thousands come out for the Race each year, which is proof that we need to continue to do everything we can to educate, inspire and reach out to as many women as we can.”

Because there is no screening test for ovarian cancer, Joan strives to educate women about the signs and symptoms of ovarian cancer: bloating, pelvic or abdominal pain, difficulty eating or feeling full quickly and urinary urgency or frequency. She also works to dispel the myth that a woman who has had her ovaries removed cannot get ovarian cancer. According to Joan, “the possibility of having ovarian cancer doesn’t require a pair of ovaries. At one time, every woman had a pair of ovaries and that’s reason enough to stay educated and informed about your body.”

About Jodi’s Race for Awareness
Jodi’s Race for Awareness was started in 2010 by Jodi Brammeier, a young wife and mother who believed her cancer would have been discovered earlier if she had known the symptoms of ovarian cancer. Jodi’s Race has raised more than $1.25 million to educate and assist Colorado women. Although Brammeier lost her battle with ovarian cancer shortly after the inaugural race, her spirit lives on at the annual event that helps raise awareness so that other women might find their cancer earlier and stand a better chance to survive the disease. Online registration is available at www.jodisrace.org.
All money raised from Jodi’s Race remains in Colorado and funds initiatives that support women with ovarian cancer, including COCACares Financial Assistance, Nicki’s Circle Support Groups, the Ovarian Cancer Resource Guide, Comfort Kits for the newly diagnosed, an annual Raise Awareness campaign, and Survivors Teaching Students: Saving Women’s Lives®, a national program of the Ovarian Cancer Research Fund Alliance (OFRFA).
In addition to participating on June 9th, supporters can also register for a Virtual Run or an Ova Sleep option at www.jodisrace.org. More information about COCA and its programs is available at www.colo-ovariancancer.org.