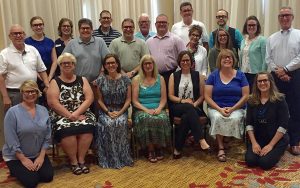 CASA is a national non-profit organization that recruits and professionally trains CASA Volunteer Advocates who are assigned to represent children in need, as identified by court jurisdictions throughout the U.S. “Professionally trained CASA Volunteer Advocates are a vital link to ensuring that our most severely abused and neglected children have a voice in court,” said Chief Judge Patrick Murphy of the state’s 17th Judicial District, which serves Adams and Broomfield Counties.

“Locally, about 1,100 children need a CASA Volunteer Advocate each year, as requested by the 17th Judicial District; however, only about 500 of those children currently can be served,” points out Bob Grant, former Adams County District Attorney and Vice Chair of CASA of Adams and Broomfield Counties. “Annually, an additional 600 local children need a CASA Volunteer Advocate, but cannot be provided one,” said Grant.

“Through our new CASA Envision Coalition, we hope to be able to serve every child who needs a CASA Volunteer Advocate,” said Lindsay Lierman, Executive Director of CASA of Adams and Broomfield Counties. CASA is recruiting coalition members who will:

The CASA Volunteer Peer Coordinator model has been employed successfully by CASA offices elsewhere in the nation since 2006.

Those interested in joining or knowing more about the CASA Envision Coalition, or becoming a professionally trained CASA Volunteer Advocate, are invited to visit CASA17th.com or call 303.654.3378.