My Mother’s Italian, My Father’s Jewish & I’m in Therapy! 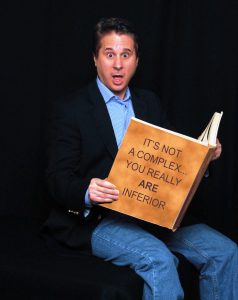 Described as “One part lasagna, one part kreplach, and two parts Prozac,” you don’t have to be Jewish or Italian to love this show. All you need is to know what it feels like to leave a family dinner with heartburn and a headache!

My Mother’s Italian, My Father’s Jewish & I’m in Therapy! played for two years in New York City and has toured internationally in more than 100 cities. 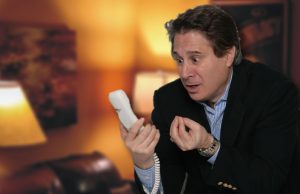 Written by award-winning author Steve Solomon, the hilarious one-man comedy is based on his life growing up in a wacky family noted for its bi-ethnic diversity and aptitude for dysfunctional behavior, and all the people in his life whose sole purpose was to drive him into therapy! The author, whose mother is from Palermo and whose father is from Russia, grew up as one of two siblings in Brooklyn.

My Mother’s Italian, My Father’s Jewish & I’m in Therapy!, stars award-winning actor and comedian Peter Fogel, who has appeared in more than 20 television programs including Married With Children, Unhappily Ever After and Men Behaving Badly.

“As heartwarming as comfort food. Everyone can relate to this!”
– Martha Stewart Living Radio

The show is produced by Philip Roger Roy and Dana Matthow.   For more information, visit PlayhouseInfo.com

Peter J. Fogel is an award-winning comedian, actor, playwright and published author who has performed in the U.S., Canada and Australia, for more than 25 years.

He’s either worked or performed on more than 22 television programs such as Comic Strip Live, Comedy on the Road, Married With Children, Unhappily Ever After, Chicago Sons (Jason Bateman) and Men Behaving Badly! (Rob Schneider).

No stranger to theatrical audiences, Peter’s had the good fortune of gracing the stage at the Parker Playhouse, Coral Springs Center for the Performing Arts, Wisdom Bridge Theatre, Gordon Center for the Arts, SUNY Rockland Community College’s Cultural Arts Center and Lyric Theatre. Theatre credits include Yentl, Ghosts of a Lonely Heart and Cocoa’s Cabaret and Burlesque (Seminole Casino).

As a commercial actor, you might have seen or heard Peter shamelessly hawk products for Budweiser, Zima, American Express, Wisk Detergent (He was the Ring Around the Collar Man).

When not acting, Peter keeps busy as an in-demand corporate trainer/business speaker and is the best-selling author of Reboot Your Career: 27 Ways to Reinvent Yourself in the Workplace (If You Still have a Job!).

As if he’s not busy enough, Peter’s also the Host of Boomer Humor Radio, the number one self-indulgent help show on internet radio (www.boomerhumorradio.com).