Debbie brings a great deal of knowledge and experience to the position. She was crowned Ms. Colorado Senior America in 2012, and placed in the “Top Ten” at the national Ms. Senior America Pageant that year. Debbie said, “Following my reign, I wanted to return what I could to those ladies who played such a positive role in my sense of accomplishment and self-awareness. I never imagined I would be a part of such a diverse and gifted group of ladies where I could continue doing what I love and using my voice to uplift others at this stage of my life.Ó 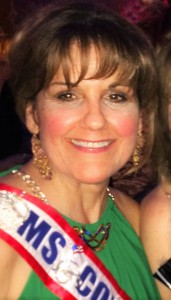 Following her reign, she wanted to be more involved in the organization which provides the opportunity for senior women to continue using their talents and spirit of volunteerism to give back to their Colorado communities. Debbie served the MCSAP, Inc. as co-president in 2013-14 and president in 2014-15. Following the resignation of the previous State Pageant Administrator, Sandy Ratajik, Debbie served with the Administrative Board members who assumed the responsibilities of the position.

Debbie continues to be actively involved in the organization even though she works full time at DaVita, has three children and six grandchildren (with another on the way), and has been battling M.S. for over 28 years.

She is excited to take on this new role, which includes serving as Production Manager for the upcoming 2016 Ms. Colorado Senior America Pageant to be held on April 17, 2016, at 2 p.m. at the Lakewood Cultural Center, 470 S. Allison Parkway, Lakewood, CO. She, along with the organization’s fabulous members, will be presenting an entertaining production that will showcase the contestants vying for the title of Ms. Colorado Senior America 2016.

Contestants are now being sought to compete for the title and crown for 2016. If you feel you exemplify the inner beauty and dignity of a Ms. Colorado Senior America, contact Debbie today at 303-570-5394 (db4truth@outlook.com) or visit the club’s website at www.colosramerica.com. Contestants must be 60 plus years of age to enter. During the pageant, contestants will be scored by a panel of judges using the criteria of a 5-minute private interview, an evening gown competition displaying poise and elegance, a statement that conveys the contestant’s “philosophy of life,” and a talent presentation demonstrating that a woman’s giftedness and accomplishments need not diminish with maturing age. The application deadline is March 1, 2016.

MCSAP, Inc. also installed a new Board in November including: President, Marj Dow; Vice President, Judy Rowe, Secretary Ginny Butler, and Treasurer Linda Trabert Klein. The Colorado Cameo Club, as the supporting arm of the Pageant, is to encourage productive senior women in giving back to their Colorado communities. All contestants in the Pageant become automatic members of this group. Club members as diverse and multi-talented members perform variety shows at various venues throughout the area. If you want more information about supporting this vibrant group, you can book a showcase at your location by calling Ramona DeLaney, 303-759-8148.