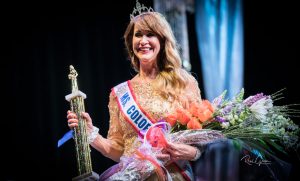 Lori was born on a ranch in Wyoming and attended college in Utah on a full academic scholarship. This mother of 2 became a flight attendant, travel agent and even a female oil worker! Over the years of working and volunteering at the various places, she says, “I was never aware of any awards being given out, nor did I receive one. Being blessed to serve in my community and workplace was, and is, my great reward!” When asked about reaching the age of 60 years old, beautiful wide-eyed Lori comments, “I can finally – finally – take a full breath. It has been glorious! I have been tendered and seasoned by time and find myself with a whole new level of appreciation and love for those around me.”.

Debbie Buczkowski (Ms. Colorado Senior America 2012), opened the ceremony singing “God Bless America”. The opening number “Reach for the Stars” in keeping with the Theme “25 Year of Elegance” was created by Debbie and showcased the talents of the Colorado Cameo Club members. It outlined a senior woman, played by Annette Germinario, who was reluctant to be involved in a pageant and found she had friends to encourage her.

The pageant’s second act had more than 22 Ragtimers from Colorado and Arizona perform their Cameo Club favorite “Maple Leaf Rag” Tambourine routine. It was spectacular! Contestants then graced the stage modeling their beautiful evening gowns with poise and elegance walking the full length of the stage with turns and poses showing themselves to best advance. Then after a presentation of 25 years of Colorado Queens then contestants returned for the crowning.

What an exciting afternoon!  This marked the 25th Anniversary of the annual pageant, created to give honor to women who have reached the age of elegance, 60+ years of age. The pageant “Reach for the Stars, 25 Years of Elegance,” celebrated the tremendous wealth of beauty, talent, and experience that senior women want to share with their communities and each other

The Pageant is a charitable organization and Cameo club, its supporting arm, performs at various venues throughout the Denver Metro Area.  These ladies are to be commended for voluntarily working together to create such a wonderful afternoon of pageantry.  This day, May 25, 2019, was also proclaimed by Colo. Governor Polis as “Colorado Cameo Club/ Ms. Colorado Senior America Pageant Day”. To learn more the current Queen, or to become a contestant for 2020 visit www.colosramerica.com.

2019 Queen Lori’s first public appearance was the Commerce City Memorial Day Parade.  These women exemplify that seniors are the foundation of our nation and an example of what vitality and a spirit of community can do to help keep America strong.  Bring your well wishes as Lori will represent Colorado when she competes for the national title of Ms. Senior America in the 2019 Ms. Senior America Pageant at the Resorts Hotel on the Boardwalk in Atlantic City, New Jersey this October.