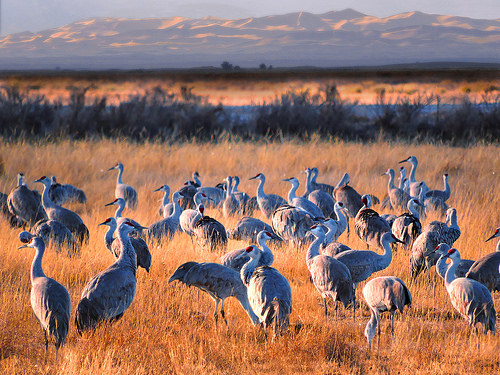 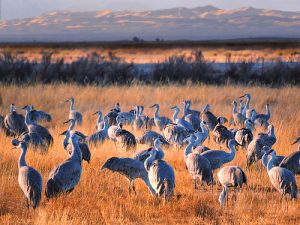 Monte Vista, CO – Every March, bird lovers flock to Colorado’s picturesque San Luis Valley from all over the state and beyond to witness the arrival of some 25,000 Sandhill Cranes.

Now in its 37th season, the crane festival is one of the oldest birding festivals in the country and the oldest in Colorado. Though the festival began in celebration of a small Whooping Crane population grown from science aimed at boosting the faltering species, the event now pays full tribute to Sandhill Cranes.

The San Luis Valley’s wide-open alpine desert, flanked by the rugged Sangre de Cristo and San Juan mountains, offers breathtaking vistas. The standalone beauty is heightened by the arrival of the cranes, drawing wildlife lovers and photographers to the Valley every year to bear witness. Other wildlife sightings include owls, eagles, elk, mule deer, pronghorn, coyote and a variety of other birds and raptors.

The elegant cranes gather by the thousands in the Monte Vista National Wildlife Refuge, which manages its habitat to attract the birds and other wildlife. Refuge staff plant barley in the surrounding fields and mowed them down just before festival. Cranes gather in the newly mowed areas to feed on the fallen grain and small animals attracted to the food. At night, the wetlands provide roosting sites that help protect cranes from predators, said refuge manager Suzanne Beauchaine.

Festivalgoers and folks visiting throughout most of March can expect to see hundreds if not thousands of cranes in one field alone. The cranes spread their expansive wings, dancing and hopping in a beautiful courtship display. During crane fest, there’s an almost reverent quiet among the hundreds of visitors lined up with cameras and binoculars along the split rail fence separating the refuge from viewing stations. The profound silence allows people to hear the rolling trill of the cranes and sound of rushing wings when the birds suddenly take off en masse.

The festival includes expert-led crane- and hawk-viewing tours, adventures to unique natural areas in the San Luis Valley, wildlife presentations, nature movies and a kid’s coloring contest. There’s also a craft and nature fair with an array of nature-oriented goodies such as birdhouses, jewelry, wood carvings, quilts, photography and paintings.