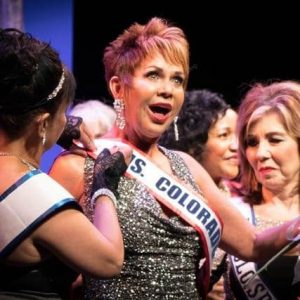 Gayle through her philanthropy efforts has raised millions of dollars for local charities. She has chaired “Western Fantasy Gala” for Volunteers of America and “Saturday Night Alive” for the Denver Center for the Performing Arts. She has also steered events for Cancer League of Colorado, and the Multiple Sclerosis Foundation just to name a few.

“My Fair Lady” set the theme for the event, and it was an exciting afternoon of talent, evening gowns, and philosophy of life presentations. The contestants are to be congratulated for their wonderful presentations in trying to capture the title. Ms. Novak was voted queen by the distinguished panel of judges Jill Beam, Joey Canyon, Jeanette Trujillo-Lucero, and Fran Owens. The judging criteria was based on private interview, presentation of philosophy of life, poise in modeling evening gowns and, of course, talent.

Michelle Rahn opened the ceremony with her guitar and robust audience sing along to the “Star Spangled Banner.” The opening number “Ascot Gavotte” in keeping with the Theme “My Fair Lady” showcased the talents of Colorado Cameo Club members and their husbands or other male escorts were dressed in black and white period attire, wearing large hats and top hats, with a splash of red, was choreographed by Jan Harley, Ms. Colorado Senior America 2002. Contestants introduced themselves to the audience by delivering their heartwarming Philosophy of Life speeches (each in under 35 seconds!).

The audience was thrilled when National Queen Carolyn Slade Harden sang her rendition of “I Love Being Here with You” personalizing it to include names of the 2018 Pageant Committee members. Contestants then commanded the stage modeling their beautiful evening gowns with poise and elegance walking the full length of the stage with turns and poses showing themselves to best advance. Co-Emcee Tony David, and new Grandfather just hours before the pageant started, thrilled the audience with his smooth singing of “Portrait of My Love.” Afterwards, as in all pageants and showcases, the Cameo Club Ragtimers lined up and did their marvelous tambourine routine to close the first act.

The second act was opened with Jeannine Montgomerie singing the number that won her the title in 2017,” I Could Have Danced All Night.” This was followed by contestants performing their highly diverse talent acts, including singers, dancers, pianists, and comedy. Carolyn Slade Harden and Michelle Rahn entertained the audience with a stirring, hand clapping song about Sisterhood while the tabulator was calculating the results. The pageant was attended by almost 450 guests.

The Pageant is a charitable organization and Cameo Club, its supporting arm, performs at various venues throughout the Denver Metro Area. These ladies are to be commended for voluntarily working together to create such a wonderful afternoon of pageantry. To learn more about them, be a contestant in the 2019 Pageant, or more information about the current queen visit www.colosramerica.com.