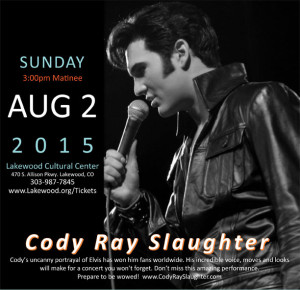 Cody Ray Slaughter, voted 2011 Ultimate Elvis Tribute Artist and Tony award nominee for his role as Elvis in the Broadway musical, The Million Dollar Quartet, performs on August 1 and 2 at the Lakewood Cultural Center. 100% of the proceeds will benefit both Evergreen Christian Outreach and Mount Evans Home Health Care and Hospice. Tickets start at $25.

Mount Evans Home Health Care & Hospice and Evergreen Christian Outreach present a benefit concert with Cody Ray Slaughter, one of the most talented Ultimate Elvis Tribute Artists in the world. Cody’s uncanny portrayal of Elvis has won him fans worldwide. He returns to Denver following his 2014 appearance in the role of Elvis Presley in the national tour of the Tony award winning hit Broadway production of The Million Dollar Quartet in which he was nominated as best featured actor in a musical for his role. He was a featured musical guest on the Late Show with David Letterman.  Cody was also named the “Ultimate Elvis Tribute Artist” by Elvis Presley Enterprises during Elvis Tribute Week 2011.  His incredible voice, moves and looks will make for an unforgettable performance. For more information on Cody, go to  www.codyrayslaughter.com. or find him on YouTube.