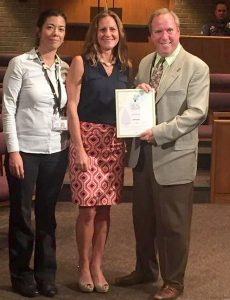 DENVER – LiveWell Colorado is proud to award Elite Status City recognition to Arvada for adopting five policies that help make it a healthy place to live, work and play.

“Arvada has made a significant investment in building a healthier community,” said Julie George, LiveWell Colorado director of HEAL Cities & Towns Campaign. “From building parks and playgrounds to improving food access, Arvada is a shining example of what it means to create a healthy community for all of its residents.”

“Building a healthy community is important to Arvada. All people, regardless of where they live, deserve to have safe and easy access to healthy foods and activities, and this endeavor really begins with local governments and our ability to engage our residents in an effort to shape their neighborhoods as they see fit,” said Arvada Mayor Marc Williams.

The following are just a few of the policies adopted by Arvada since October 2014:

Forty six cities are a part of LiveWell Colorado’s HEAL Cities & Towns Campaign, which began in 2013. “We partner with LiveWell Colorado on the HEAL Cities & Towns Campaign because we believe a healthy community is a viable, sustainable community for future generations,” said Sam Mamet, Executive Director, Colorado Municipal League. Since the campaign began, municipalities have adopted more than 70 policies tied to healthy eating and active living across the state. To learn more about Arvada and its healthy living initiatives, please visit: www.arvada.org.

LiveWell Colorado is a statewide nonprofit organization committed to preventing and reducing obesity in Colorado by promoting healthy eating and active living. With the goal of eliminating health disparities and advancing health equity, LiveWell Colorado focuses its efforts on policy, environmental and lifestyle changes that remove barriers and increase access to healthy behaviors. Working in partnership with obesity prevention initiatives across the state, LiveWell Colorado aims to provide every Coloradan with access to healthy foods and opportunities for physical activity to make Colorado the healthiest state in the nation. For more information, please visit: LiveWellColorado.org.