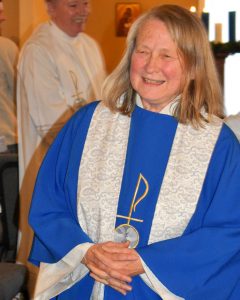 A life-long lawyer who decided to pursue a new career in the ministry is now the pastor for Holy Family Church in Aurora.

Cynthia Drew, once a practitioner of environmental law, succeeds pastor Scott Jenkins, who founded Holy Family in 1998, and recently retired.

A Louisiana native, Drew earned her undergraduate degree at Tulane University in New Orleans and her law degree at Northwestern University in Chicago, graduating in 1992.

After ten years as a practicing attorney, Drew joined the faculty at the University of Miami, where she taught environmental law for another decade.

Five years ago, Drew left academic life behind and set about to earn a master of divinity degree, graduating from the theological school at Wake Forest University in Winston – Salem, North Carolina, in 2017.

Drew then spent one year working as an emergency room chaplain for Moses Cone Hospital in Greensboro, North Carolina.

As her chaplaincy ended, Drew learned that Holy Family was looking for a new leader. After a round of interviews, Drew was hired by a unanimous vote of the congregation.

Ordained a deacon during her chaplaincy, Drew was then elevated to the priesthood in a December ceremony at Holy Family, and assumed the reins of leadership there on January 1st.

“People ask, ‘what’s different’ in my new role. I tell them that – as a lawyer – your client wants a quick fix. But, as a pastor, your ability to listen is as important as finding a solution right now,” says Drew.

“In divinity school, I learned a helpful Quaker saying. We proceed ‘until the way opens.’ That is, be patient and let circumstance season itself. A path will emerge.”

Holy Family, established in 1998, is a member of the ECC, the Ecumenical Catholic Communion, described by Newsweek magazine as “a group of churches that decline to recognize the authority of the Pope, but who see themselves nevertheless as Catholic.”

Headquartered in Saint Louis, Missouri, the ECC maintains 51 parishes in 20 states, and is led by presiding bishop Francis Krebs. According to Krebs, within the ECC, “the clergy marry, women are ordained, and the sacraments are available to all.”

Holy Family – with 100 members – is the oldest of five ECC churches in Colorado. Others include Mary of Magdala in Fort Collins, Light of Christ in Longmont, Church of the Beloved in Northglenn and Saint Paul in downtown Denver (at 1600 Grant).