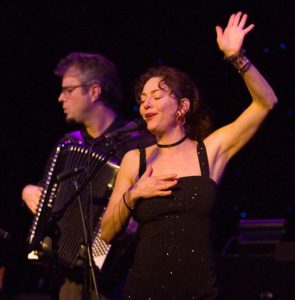 Janet Rayor and Rouge returns to Denver for one night, June 9th, at La Cour.

When Janet Rayor flies in to Denver to perform June 9th, she will be returning to her roots in more than one way. The petite Rayor doesn’t look much different from when she sang in Bear Creek High School’s The Sounds of BC , played Juliet and Bloody Mary. Janet returns to her native state of Colorado singing other roots: the music her grandmother loved.

She went on to study at Shakespeare & Co. alongside Sigourney Weaver. At 18, she was contracted with Steamboat Springs Repertory Theatre as the principal supporting actress playing Jenny Lind and touring to Denver Center Theater Company to premier Richard Gere’s Dracula. She won the prestigious best actress award [performing at Germinal Stage Denver ]and a Best Choreography Award [for Medea a Noh Cycle] from Denver Drama Critics Circle. Rayor performed her concerts and her own new vaudeville pieces around the state as an Artist in Residence with Colorado Arts and Humanities.

Based in Seattle now, her fascination with the relationship between performer and audience informs her playful concerts that return to other roots. For twenty years she toured nationally at major arts and music festivals dancing on stilts developing her ability to read and play with audiences.

She grew up listening to Edith Piaf and Josephine Baker, stars of the France and the world over. She has taken the heart of this music and truly made it her own. She translates the songs, writes songs in French, and expands covers with new sections that expand on the song imagery. A puckish quality about her allows her break out in dance and to get audiences involved in a pure expression of joy. As audience member John Normandy said recently,”I didn’t know any of the tunes, but I knew them!”

The 1920’s-50’s saw an ecstatic cross-cultural blend of French and American music in France. This tradition continues in Rouge, a band that highlights songs of Piaf, Aznavour, Trenet, and Josephine Baker with a modern Seattle acoustic influence. Rouge’s vocalist Janet Rayor returns to her native Colorado after two decades, bringing a pared-down lineup to La Cour French Art Bistro for one night only, June 9th, with 6:30pm and 8:30pm seatings.
“I feel like I’ve discovered a state treasure,” Denver reviewer M.S. Mason once wrote of Janet Rayor in concert. Rayor left shortly after for Seattle, taking her concert that combined music and comedy, dance and circus arts.
Now the the leader of Rouge, Rayor returns to Denver for one night, June 9th, at La Cour (1643 S. Broadway) a French art bistro. Two seatings at 6:30pm and 8:30pm will offer old fans and new a chance to enjoy live music with dinner.
As an Artist-in-Residence with the Colorado Arts & Humanities Commission, Janet performed concerts around the state as well as at the Aurora Fox Theatre, the Shwayder Theatre, StageWest and Arvada Center. This time, Janet will not be unicycling or doing a duet on one pair of stilts. She will still be using her full-range voice and puckish humor to create a thoroughly joyous experience.
Matching La Cour’s French atmosphere, Rayor brings a concert of “Piaf to Zaz ‘n Gypsy Jazz” accompanied by pianist Clayton Murray. Reservations for June 9th, Thursday, can be made at 303-777-5000. For more information: http://www.denversartbar.com or Rougemusic.com/piano-vocals