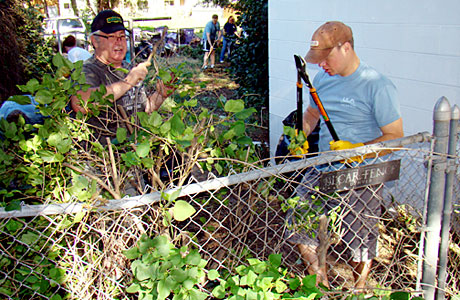 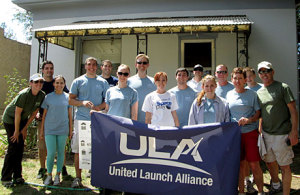 Local rocket scientists picked up paint brushes, rollers and garden tools on Aug. 16 to spruce up the home of a 97-year-old veteran and Pearl Harbor survivor.

The occasion was the Brothers Redevelopment mammoth Paint-A-Thon day. And it was the sixth year for Centennial-based United Launch Alliance to field a team for the effort.

The ULA team helped Brothers reach and exceed its 2014 100-home milestone that day, as 23 homes were painted across the metro area. Since Brothers began the Paint-A-Thon in 1978, more than 6,800 homes have been caulked, sealed and painted for senior homeowners.

In addition to the prep and paint work on the home, the volunteers also gave the yard a much-needed makeover, going above and beyond to help the veteran who has lived in his home for 69 years. 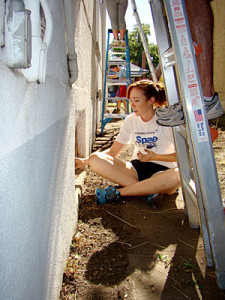 The ULA rocket scientists were joined by other staffers and family to give back to their community. The team of more than 20 was delighted to spend their Saturday helping a veteran who had served our country.

Volunteerism is in the company’s DNA. The ULA corporate citizenship program also addresses “the need to excite our next generation of engineers. ULA is engaged in schools to inspire the rocket scientists of tomorrow.” A few weeks before the Paint-A-Thon, ULA provided young scientists with a hands-on experience launching rockets high above the plains near Pueblo.

In the three weeks before the Paint-A-Thon had been busy for United Launch Alliance: At Cape Canaveral on July 28, ULA launched three satellites into orbit for the Air Force; also from Cape Canaveral on Aug. 1, the company launched the Atlas V rocket carrying a GPS satellite into orbit; and on Aug. 13 – from Vanderberg Air Force Base in California — the Atlas V 401 rocket was launched with WorldView-3 onboard for Digital Globe. 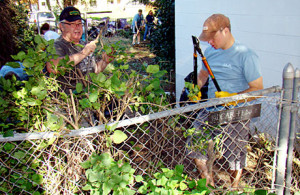 The volunteers– and sponsors — are both critical ingredients to the Paint-A-Thon’s success. Each year, Brothers also seeks the support of individual donors and corporate sponsors to provide money for supplies.