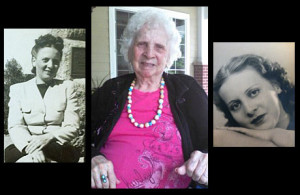 Irma, who prefers to be called “Billie”, was born on January 20, 1914. Last  month, we were honored to celebrate a milestone with her, her 100th Birthday!

Born the oldest of four girls in Springfield, Illinois, Billie spent a majority of her life living in the Windy-City and is known as an “Old Chicago Girl.” In her youth she was a dancer, and one of her hobbies was raising parakeets. She even taught one of her birds how to speak over 200 words.

Billie was married to her husband Charlie, “my Charlie,” as she refers to him now, for 61 years. They did not have any children of their own, but she considered her nieces and nephews as her own children, spoiling and taking wonderful care of them.

Billie was a dedicated career woman. She worked on the Titan 1 and Titan 2 Missiles, soldering electrical parts together. She had the highest security clearance and could not even tell her family what she was working on.

Billie still enjoys participating in activities at Christopher House Rehabilitation and Care Community. You’ll often find her beading, playing bingo and painting. She is a very talented painter and one of her paintings from a water colors group, will be featured in an upcoming gallery show scheduled this spring at Christopher House.

Congratulations to Billie on her 100th birthday!