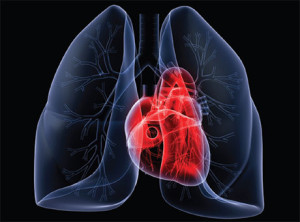 For most people who are blessed with good general health, the concept of oxygen, the need for it, and what it does in the body is of limited importance. Since there is plenty of free oxygen in the air we breathe, there is no real need to understand much more than the basics most of us were taught somewhere back in junior high or maybe high school. Today, we know a great deal about oxygen and indeed all of the gasses that make up our atmosphere. Let’s start with a basic review of oxygen, and then show how it affects both the heart and lungs.

Oxygen is a colorless, odorless, and tasteless gas that makes up about 21% of the air we breathe.  Nitrogen makes up just over 78% with a handful (7) of trace gases making up the last 1%. It is important to remember that even though oxygen will not explode it will very vigorously support an open flame and burn brighter and hotter if in the immediate area of an open flame. The lungs are the only organ system that is exposed to the external environment. Together both adult lungs weigh a little less than 2 pounds.

Although the lungs have several metabolic functions, they exist primarily to accomplish two very important goals. The first is to extract the oxygen out of the air we breathe and deliver it into the bloodstream so that it may be delivered to the trillions of cells that make up our body.  This alone is a full time job as the lungs must supply about 250cc (about 9 shot glasses) of oxygen every minute of every hour of every day.  Why is oxygen so important to the cells of the body?  The simplest answer to make and store energy.  Oxygen is a key ingredient along with the foods we eat that enable us to produce the  energy we need to do even the most basic tasks of our everyday life.

This energy producing cycle is very efficient, with carbon dioxide being the chief by-product of metabolism.  This then is the second important role performed by the lungs. As we utilize our oxygen to produce energy, we must eliminate the carbon dioxide that results from our metabolic pathways as it is being produced.  This figure is normally about 200cc per minute.  The regulation of carbon dioxide in our blood is one of the key mechanisms that keeps our blood chemistry within normal limits as it relates to the balance of acids and bases in our blood.

Now we can see what the Heart-Lung connection is really all about.  Breathing is normally effortless.  Under most conditions, breathing is under the control of the brain, but there is input from many other areas of the heart-lung connection.  The carbon dioxide that is produced normally during metabolism, is exhaled as it is produced, thereby maintaining “normalcy” of our blood chemistry.  Oxygen in the air we breathe is very quickly transferred from the lung tissues to the blood stream and from there it is delivered by the circulatory system to each and every cell in the body, so that oxygen may be used to produce and store energy.

It is a beautiful and extremely efficient system.  It has its own command center(s) and for the most part is invisible to the end user which is you and I.  It is only when something interferes with the normal heart-lung connections that we become symptomatic. And it is usually at this point we get concerned enough, or maybe scared enough to seek professional medical attention.