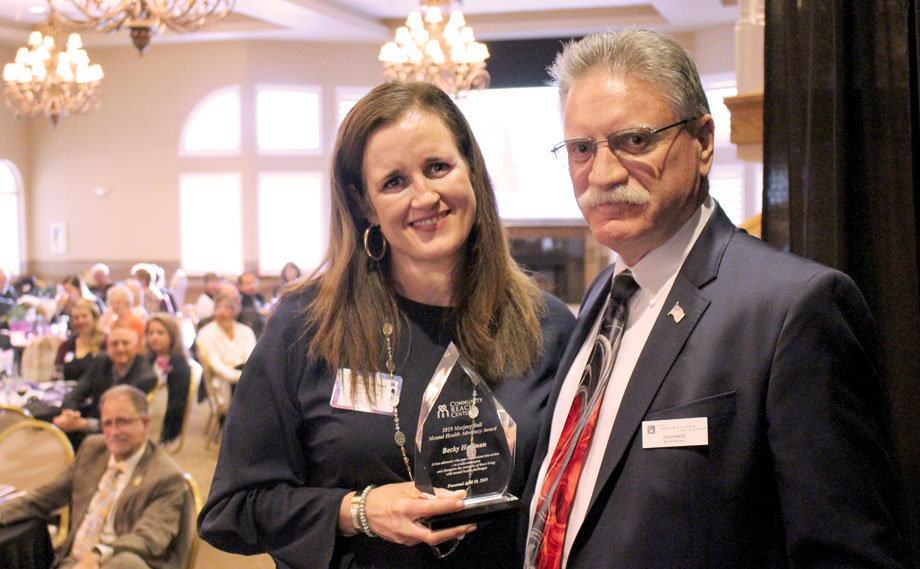 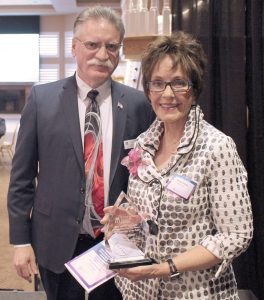 Alengi garners award for volunteer service
Westminster resident Donna Alengi garnered the 2019 Mary Ciancio Memorial Distinguished Service Award. Alengi joined CASA of Adams and Broomfield Counties in 2015 as a volunteer advocate and now serves on its board of directors. A two-time cancer survivor, she makes herself available to cancer patients and their families, including weekly meetings to offer encouragement and provide meals, resources and assistance to those who are navigating treatment.

For 36 years, she has volunteered with Al-Anon, which works with families impacted by alcohol and drug use. She has sponsored or mentored more than 100 women.
Alengi was nominated by Bob Grant, chair of CASA of Adams & Broomfield Counties and former Adams County District Attorney. In his nomination letter, he wrote that Alengi’s “entire life has been dedicated to the betterment or others and her community.”

The dinner marked the 40th year of the memorial event in honor of Mary Ciancio, who spearheaded fundraising activities in the early 1960s to support the completion of Community Reach Center’s first facility in Commerce City and served on the Community Reach board for many years. Her son, Gene Ciancio, provided opening remarks at the event. He said her motto was, “What can we do for someone today?” 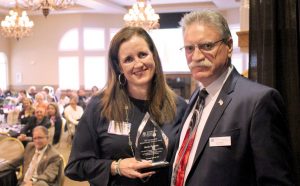 Hoffman honored with mental health advocacy award
Becky Hoffman was honored with the 2019 Marjory Ball Mental Health Advocacy Award for her inspirational leadership as CEO of the Adams County Youth Initiative. The program was founded in 2008, driven with the advocacy of former Adams County District Attorney Don Quick.

Hoffman advocates to ensure Adams County youth have open access to the mental health services they need, understanding that academic success is tethered to mental wellness.

The Marjory Ball Mental Health Advocacy Award was created in 2007 to commemorate the late Community Reach Center Board Member Marjory Ball’s role as a major advocate for individuals living with mental health challenges. This award recognizes outstanding individuals in our community who follow her excellent example of advocating on behalf of challenged individuals in need of help.

Outstanding students honored
For the second year, the Community Reach Center Foundation Board invited Adams County school districts to highlight top students who are active in their communities. The five students chosen were:

Michael “Alex” Vidal of York International School at Mapleton Public Schools was noted for his work in leading a fundraising campaign to install a water bottle filling station at his school to decrease waste due to disposable plastic bottles. He served on the Youth-Roots board where he helped identify youth needs and helped the group raise $5,000. He is president of the schools National Honor Society.

Sidney Yang of Northglenn High School at Adams 12 School District helped coordinate the school’s Safe Street rooms for Halloween and helped to choreograph and coordinate the group to perform dances at school assemblies. She has maintained a high GPA while working part time and engaging with the Hmong community.

Angel Sosa-Adame of Mapleton Public Schools volunteers with Junior Ambassadors and has helped plan prom and the district junior homecoming float. He is a member of National Honor Society, a board member with Youth-Roots and president and co-founder of the Environmental Club. He plays in band and competes in cross country.

Other nominees highlighted
Seven other impressive nominees were introduced and featured in a video presentation for the 2019 Mary Ciancio Memorial Distinguished Service Award. They included:

Alma Garza: She is an advocate for her community. She coordinated a group of community members to create Comunidad, Unidad, Y Apoyo (which means Community, Unity and Support). And she volunteers about 20 hours per week with Growing Home. Nominated by Itzel Hernandez.

Maria Prochazka: She has volunteered at North Suburban Medical Center for nearly 19 years at the Information Desk. She has contributed more than 3,000 hours and greeted well over 1,000 patients when they arrive at the hospital. She also volunteers with 9Health Fair, Trick-or-Treat Street at her church and with Senior Hub in its community Garden in the summer. Nominated by Lorie Ward.

Gary and Carol Hastings: The two were nominated as a couple because they do so much community service together. Both are active volunteers with the Adams County Aging Network, the Thornton Senior Center, the 55 Plus Club and the RSVP veteran companionship squad that provides fellowship for other military veterans and their spouses. Gary has either assisted or coached the Thornton Junior Football league for 42 years. Carol served as a Brownie and Girl Scout leaders for eight years. Nominated by Tom Rapp.

Sara Hoffman: She and her husband purchased RSS Insurance Services from Sara’s father years ago. Sara vowed to give back to the community, and the couple launched the Charity of the Quarter Referral Program, in which they donate $10 for every referral they receive to charity, resulting in thousands of dollars in donations for local nonprofits. Nominated by Jenna Witt.

Dr. Steve Nelson: He has been a volunteer provider with the Colorado Donated Dental Service since 1991, donating life-changing dental services to benefit 50 patients at a total value of more than $102,000. He is active with the American Dental Association. He is in his 16th term as the Speaker of the House of Delegates for the American Association of Oral and Maxillofacial Surgeons. Nominated by Jennifer Venerable.

Deb Haviland: She has been an active member of the Rotary Club of Westminster for 23 years, volunteers with the Westminster Community Artist Series and Special Olympics. She is a member of the Executive Committee for Rally for the Cure Golf Tournament and serves on Community Reach Center’s board of directors. Nominated by Stephanie Baer.

Anthony “Tony” Janezic: He is a greeter in the Emergency Department at St. Anthony North Health Campus. When a car rolls up to the ER entrance, he is immediately there with a wheelchair and an offer of a blanket and pillow for the patient’s comfort. Nominated by Molly Minninger.

Established in 1979, the Mary Ciancio Memorial Distinguished Award was named in honor of the late Mary Ciancio. Mary advocated and volunteered for nearly 70 years on behalf of people with disabilities and health challenges. She had a special place in her heart for people living with severe and persistent mental illness – so much so that she became known as the “Mother of Mental Health” in Adams County.

Community Reach Center is a top-tier behavioral health and wellness provider serving people of all ages at seven outpatient offices and more than 100 community-based sites throughout Adams County, Colorado. The Center has worked diligently to preserve and promote a commitment to excellence, professionalism and integrity within our community healthcare system for 60 years – currently serving more than 22,000 people annually. We employ about 600 highly trained professionals committed to health and wellness. Community Reach Center is a leading integrated care partner in Colorado – meaning that mental healthcare, primary medical care and dental services are provided in one location at clinics throughout the north Denver metro area.