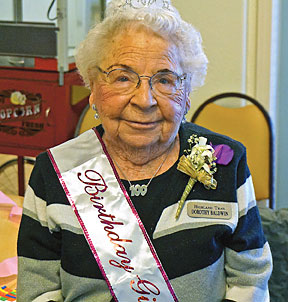 Dorothy Baldwin celebrated her 100th Birthday on Dec. 5th at Highland Trail Independent Retirement Community in Broomfield. A party was held in honor of this momentous occasion with family, friends and staff at Highland Trail in attendance . Also, as part of the celebration, singer/songwriter Scott Buckley provided the music.

Dorothy’s life began in St. Paul Minnesota where she was born on Dec. 5th, 1917. She grew up in Pokegama Lake, Minnesota where she met her husband Denver at age 14 when he asked her to dance at a High School event. They were married on Dorothy’s Birthday on Dec. 5th 1936 and spent 65 years together until her beloved Denver passed away. The couple were blessed with two children, Gary Dale and Darlene Ruth, 3 grandchildren and 6 great grandchildren.

In her early 30’s Dorothy and Denver purchased a small lake cabin in Northern Minnesota on Ponto Lake. Denver, by his own hands added to the cabin over time by adding three additions, a fireplace, deck and steps leading to the lake. The Lakehouse many times over the years became a focal point for family gatherings and remains so to this day. Some of the many treasured memories of the family include boating, fishing, costume parties and playing cards. Dorothy rode her first Jet Ski at age 77 when the family gathered at the Lakehouse for her granddaughter Angela’s wedding.

As time went on and their children were grown, Dorothy and Denver enjoyed traveling to many different places. After Denver retired, they would split their time between the Lakehouse and Phoenix Arizona. This continued for nearly 40 years.

Family members, friends and Dorothy herself, will tell you that she always took chances and rarely said no to explore opportunities to do new things. She is cherished, loved and respected by everyone who has been part of her life.

Dorothy was asked, what is the secret to your happiness and positive outlook on life? Her response was, “Make the best of everything, have a good attitude, stay busy, keep moving and always be kind.”

Congratulations Dorothy on your 100th Birthday and to many more wonderful memories!! Thank you for being such an inspiration to so many!!