Get The Led Out, The American Led Zeppelin, September 30 at Red Rocks

“I come from the land of ice and snow,
from the midnight sun where the hot springs blow!”
—Led Zeppelin 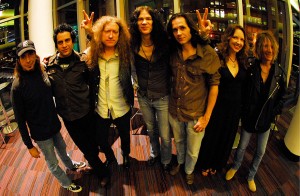 Get The Led Out, “The American Led Zeppelin,” will perform at Red Rocks on Friday, September 30.

WHAT: It’s time to wake up and rock the house with GET THE LED OUT – The American Led Zeppelin. Come relive the passion and fury of the timeless rock anthems and intimate melodies that spans the mythic career of rock ‘n roll royalty that is Led Zeppelin.

Come celebrate the music that defined the rock era, through their acclaimed note-for-note scrambling on the solos and fills, frenetic soloing, impeccable harmonies, pitch-perfect vocals complete with spot-on wailing, staging, state-of-the-art quadraphonic sound and lighting, all coming together to create a genuine reincarnation of Led Zeppelin.

Led Zeppelin held its legendary concert debut in Denver. Barry Fey, Rock Promoter, said of the Led Zeppelin performance on December 26, 1968 at the Denver Auditorium Arena: “It’s said that the unsuspecting audience at the concert had absolutely no idea that this new ‘heavy metal’ band from Britain was added to the gig. This historic night marked Led Zeppelin’s smashing American debut.” And now, 48 years later, fans of Led Zeppelin get to relive rock history with GET THE LED OUT The American Led Zeppelin at Red Rocks.

For more information, and to sample music and video on the band, please go to:
www.gtlorocks.com