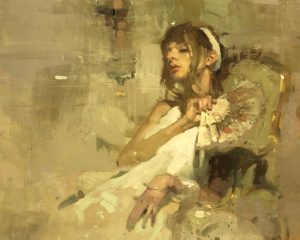 DENVER, CO. – In the final show of 2016 Gallery 1261 presents a dynamic exhibition featuring three artists whose work exemplifies some of the best in their respective genres. The work of Greg Gandy, Jeremy Mann, and Timothy P Wilson, while different thematically and stylistically, come together in what will be a wonderful and exciting exhibition that marks the end of a fantastic year. The show opens December 9 and runs through January 7, with an opening reception on Friday, December 9 from 6-9 p.m.

Greg Gandy’s body of work presents a clear and highly realistic perspective on the spaces and places he finds himself in. Living and working in San Francisco, we catch a glimpse of the city in works like Crossing Leavenworth and Looking Down Post Street Towards Downtown. Gandy depicts these places with immense attention to detail and skill that verges on the photorealistic. In his landscape works we encounter much of the same virtuosity, though in these pieces we see Gandy blending elements of impressionism and abstraction into his highly-turned sense of realism, creating softer works of art that resonate just as warmly with the viewer.

Jeremy Mann, also a Bay Area artist, is well known for his figurative and cityscape paintings. Works of both genres will populate his space within the gallery, displaying his unique aesthetic and further demonstrating why it stands out amongst much of the work we see today. In figurative pieces like Note in Pale Green No 6 and Note in Pale Yellow No 3 his instantly recognizable style is ever present, the models both blend in and stand out from their respective backgrounds, drawing the viewer in. In NYC, a cityscape, Mann balances realism with abstraction in such a way as to create an illusion of reflectivity, setting the viewer into the scene as if from behind a window.

The work of Timothy P Wilson is highly abstract with hints of more acutely realized objects and figures. His palate, typically a mixture of earth tones which when combined create works that lend themselves to both the serene and the unsettling which is a rarity in and of itself. This duality is something to marvel at can be seen in works like Maelstrom and Florida Lake. All the elements combine to make works which resonate soundly with their viewers.

When seen together, the works in this exhibition present three distinct personalities and styles that stand out amongst the sea of artwork we see today. When viewed altogether, their work presents a strong sense of the direction contemporary painting is heading. From hyper-realism all the way to blurred abstraction, this exhibition showcases phenomenal work from three exceptional artists.