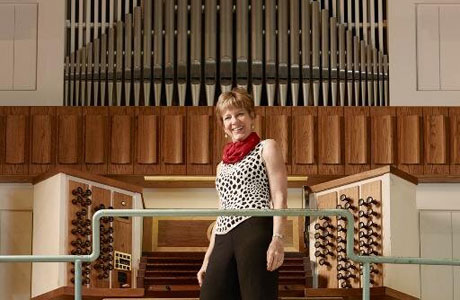 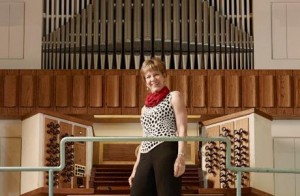 Dr.  Faythe Freese, Professor of Organ at the University of Alabama School of Music, is in demand as a recitalist throughout the United States, Germany, Denmark, South Korea and Singapore.  She is the first American woman to have recorded at L’Eglise de la Sainte-Trinité, Paris, on the landmark instrument where Guilmant, Messiaen and Hakim were titular organists.  Her fourth compact disc, entitled “Faythe Freese à l’Orgue de l’Eglise de la Sainte Trinité,” has received critical acclaim in The Diapason, The American Organist, and The Tracker magazines.  Her fifth compact disc, recorded at Magdeburg Cathedral, Germany, entitled “The Freese Collection” is Dr. Freese’s most recent release.  The solo organ work entitled “The Freese Collection,” a work by Dr. Pamela Decker, was commissioned and premiered by Dr. Freese in January  2013.  Dr. Freese has also commissioned the following new works for solo organ: “Passacaglia on BACH” by Pamela Decker, “To Call My True Love to My Dance’’ by Naji Hakim, and “Out of Egypt” by John Baboukis.

Dr. Freese lived in Magdeburg, Germany, for over three months in spring 2015 during her sabbatical and played and performed on over fifty historic organs in nine countries.  She collaborated with early performance practice experts such as Ton Koopman, Montserrat Torrent, Pieter van Dijk, Aude Heutermatte and João Vaz on period repertoire.  Her most recent recitals upon her return incorporate the historic repertoire performed by Dr. Freese and accompanied by a slide show of the historic instruments upon which she performed in the spring.

She was a featured lecturer and concert artist at national conventions of the American Guild of Organists in Boston and in Washington, DC;   and she has appeared at regional conventions of the American Guild of Organists in Greensboro, NC; in San Antonio, TX; and at the Biennial Convention of the Association of Lutheran Church Musicians.  Dr. Freese’s performances have been hailed as “powerful
masterful
impressive
brilliant.”  She has also appeared as a faculty member and featured performer at Pipe Organ Encounters in Boston, MA; in Birmingham, AL; in Gainesville, FL; and in Atlanta, GA.

Dr. Freese holds degrees in organ performance and church music from Indiana University.  She has held faculty positions at Indiana University, Concordia University in Austin, University of North Dakota-Williston, and Andrew College.  As a Fulbright scholar and an Indiana University/Kiel Ausstausch Programme participant, she studied the works of Jean Langlais with the composer in France, and the works of Max Reger with Heinz Wunderlich in Germany.  Her organ teachers have included Marilyn Keiser, Robert Rayfield, William Eifrig and Phillip Gehring.  She has coached with Dame Gillian Weir, Simon Preston, and Daniel Roth.

Dr. Freese is the author of publications entitled: “Five Chorale Preludes & Free Hymn Accompaniments;”  “Sunday Morning Organist: A Survivor’s Guide for the Pianist;” and “Sonus Novus: Intonations and Harmonizations” (Concordia Publishing House).   She is on the roster of Concert Artist Cooperative, BethZucchino@aol.com.

Dr. Freese’s program is entitled “Boa Viagem” and comprises a musical and pictorial travelogue of three of the countries whose historical instruments she played on her recent European trip.  Also featured will be the Colorado premiere of The Freese Collection, a collection of pieces commissioned by Dr. Freese from composer-organist Pamela Decker.  She intends that this program will be interesting to non-organists and organists alike.  Tickets will be priced at $25 (adults), $20 (seniors over 60), $15 (students with ID), and $10 (children).  Members of the American Guild of Organists and their families will be able to purchase tickets at half price in advance through the office at Augustana Lutheran Church or through augustanaarts.org.

Dr. Freese will also present a workshop for church organists and other interested people at Augustana Lutheran Church on Friday evening, October 2, from 7:00 PM until 9:00 PM.  It will be entitled “POPS! – New Preludes, Offertories, and Postludes.”  She will address the very practical topic of new service music for the organ, including her own publications.  The cost for the workshop will be $10.