“Drums” Returns with Sights and Sounds of the Marching Arts 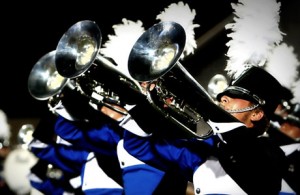 The intricate movement and powerful sound of a drum corps production has thrilled thousands at the annual Drums Along the Rockies.

For more than 50 years, Drums Along the Rockies has provided spectacular entertainment in one of Denver’s most highly-anticipated summer music attractions.

The evening’s performances feature the colorful sights and powerful sounds unique to the marching arts. The arrangements for brass, percussion and color guard combined with intricate marching maneuvers are often compared to “a Broadway musical on a football field”.

“Pre-game” activities are always festive with tailgating, a hospitality tent with food and refreshment and entertainment by the Stampede and Bronco Brass. A popular event open to the public, the “DrumLine Battle” pits several high school drum lines in fierce but friendly competition.

Drums Along the Rockies is produced by Ascend Performing Arts with support from Denver Post Community, 9News and 850 KOA.

Tickets are now available at www.drumsalongtherockies.com, by calling 1.888.306.3786 or at all Ticketmaster outlets. Reduce priced group tickets are available by calling 303.424.6396. The box office at Sports Authority Field opens July 12th at 12pm, the gates at 5pm for the 6:30 performances.