Drums Along the Rockies to Thrill Thousands 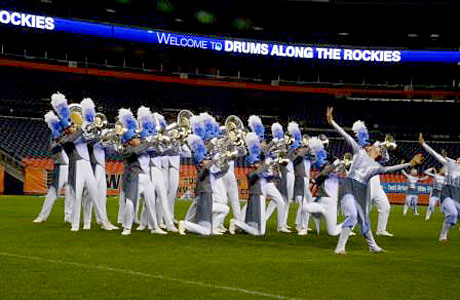 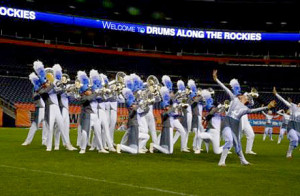 Year-in and year-out, Drums Along the Rockies attracts one of the best and most talented lineups on the Drum Corps International tour- and this year is no exception. The 2015 line-up promises to electrify both long-time drum corps fanatics and first-time viewers of the activity. Headed by 2014 World Championship runner-up Blue Coats of Canton, OH, the always entertaining corps will be joined in competition by Denver favorite Blue Knights, Seattle, WA’s Cascades; Mandarins of Sacramento, CA; area favorite Troopers of Casper, WY; Iowa’s Colts, Oregon Crusaders from Portland; Pacific Crest, Diamond Bar, CA; the Academy, Tempe, AZ; and Georgia’s Spirit of Atlanta.

The evening’s performances feature the colorful sights and powerful sounds unique to the marching arts. The arrangements for brass, percussion and color guard combined with intricate marching maneuvers are often compared to “a Broadway musical on a football field”.

Open to the public “pre-game” activities are always festive with tailgating, a hospitality tent with food and refreshment and high-spirited entertainment by the Bronco Brass and Stampede drumline.

Produced by Colorado non-profit Ascend Performing Arts, with support from the Xerox Corporation, proceeds from the event support the organization’s purpose to further the education and growth of young people through participation in high-caliber performing arts programs.

Advance ticket purchase is available at www.drumsalongtherockies.com  The box office opens July 11 at 12 noon with gates opening at 5:00pm for the 6:30 performance. Group tickets are available by contacting the Drums Along the Rockies ticket line at (888) 306-DRUM or (303) 424-6396.