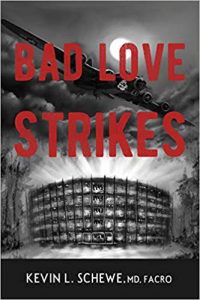 Kevin L. Schewe, MD, FACRO, a resident of Denver, Colorado, is a board-certified cancer specialist who has been in the private practice of radiation oncology for 32+ years. He is an entrepreneur, having founded Elite Therapeutics and Bad Love Cosmetics Company, LLC. He also serves as Chairman of the Board of a small, publicly-traded, renewable, green energy and animal feed company called VIASPACE, Inc. Bad Love Strikes is his debut novel. You can connect with Schewe through his website: https://kevinschewe.com/ or through Instagram: @realkevinschewe.

Bad Love Strikes kicks off in October 1939, as Albert Einstein warns President Franklin D. Roosevelt that Nazi Germany is actively pursuing an atomic bomb and urges him to make sure that the United States develops the bomb first. Roosevelt heeds the warning and launches the “Manhattan Project” in June 1942. In October 1942, Roosevelt tells Einstein that prudence calls for the U.S. to have a back-up plan to the Manhattan Project in case Hitler gets the bomb first. Roosevelt commissions Einstein to secretly construct a usable time travel machine code-named the “White Hole Project.” In June 1974, an adventurous group of teenage friends, who call themselves the “Bad Love Gang,” discover a tunnel leading to the White Hole Project. They learn how to use the time machine and become the first known humans to travel back in time and return. Their mission is to save Jews and Gypsies from the Holocaust in November 1944 by using a U.S. Air Force B-17 bomber that was known as “The Phantom Fortress.”

When asked his thoughts on his debut novel, Schewe answered “Bad Love Strikes brings interesting history to life and makes that history uniquely fun, meaningful, and entertaining. It is an action, adventure, rescue novel that makes time-travel seem real through the eyes of teenagers and young adults.”

Bad Love Strikes is available through Amazon, Barnes & Noble, and through Jan-Carol Publishing.