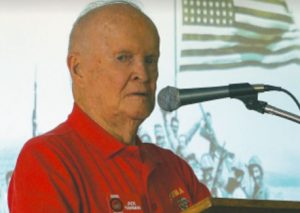 Once you have earned the title, United States Marine, you alone have affirmed a place amongst warriors through your own sweat, toil and perseverance. No one can then take that distinction from you. The Marine Corps moto, Semper Fidelis (Always Faithful) further exemplifies the continued fidelity amongst Marines as you learn leadership skills and lessons learned especially coming off the battlefield. 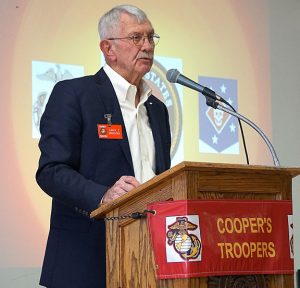 Coopers Troopers, a monthly luncheon group made up of veterans from WWII, Korea, Vietnam, the Middle Eastern wars and all in-between conflicts amplifies those lessons and promises. Meeting each month Denver area veterans, renew acquaintance, give each other the respect they have earned as defenders of America’s freedom and listen to a guest speaker on a related subject. It is all in the name of re-bonding and remembering those lost in battle.

Coopers Troopers luncheons began in the 1990s when S/Sgt Edward E. Cooper along with Marine friends met socially every month to enjoy each other’s company. Ed served the Corps honorably as a WWII and China Marine and then as a police officer with distinction. Since then, this group expanded its roster to over 150 people (men & women) including other service branches.

Al Jennings, one its participants served on Iwo Jima with 3rd Battalion, 26th Marines and became luncheon leader when Ed passed. Jennings simply structured the meetings with no dues to be held the third Thursday of every month at the Wilmore-Richter Legion Post #161 in Arvada. Under his leadership members gather each month at noon for visiting, the telling of war-stories, prayer, the Pledge of Allegiance, a home-cooked meal, announcements/member recognition and to listen to a guest speaker. The fellowship, remembering and camaraderie is indeed therapeutic considering the history of the participants. 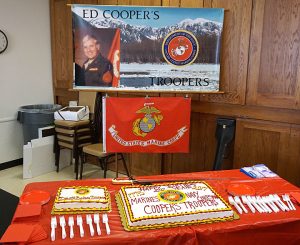 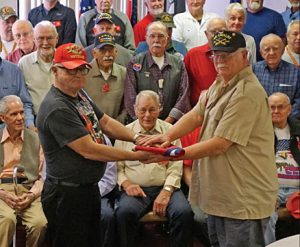 John Harris presenting a memorial flag to Cooper’s Troopers in memory of his son, Army Sgt Blake Harris, who lost his life in Iraq.

Each year, the Corps of Marines being created by a resolution of the Continental Congress on November 10, 1775 have celebrated the Marine Corps Birthday by calling to mind the glories of its long and illustrious history. From the battles of the Revolutionary War, Belleau Woods in WWI, up to the present-day Marines have won foremost honors in all the nation’s wars. It is because of these “First to Fight” Marines that our country and its citizens enjoy peace, stability and security. This year, 2017 marked the 242th Birthday of that Corps and the ‘esprit de corps’ of the Marines. Jack Thurman, who took part in the flag raising on Iwo Jima was guest speaker, LtCol Ghyno G. Kellman and SgtMaj Bryan Fuller, current Inspector-Instructors of Combat Logistics Battalion-453 (Headquartered at Buckley AFB) presided over the honors of cutting a traditional cake in celebration of the birth of our illustrious Corps’ history. The Corp’s cake-cutting ceremony is important to all Marines, as it is an annual renewal of each Marine’s commitment to the Corps…and the Corps’ commitment to our nations quest for peace and freedom worldwide. Happy Birthday Marines!