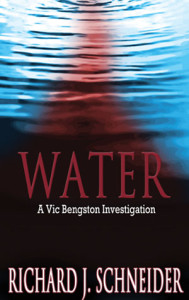 Murder over water rights is nothing new in the West. Colorado author Richard J. Schneider explores this theme in his debut mystery novel, “WATER: a Vic Bengston Investigation,” much to the joy of his readers.

“In WATER, Richard Schneider creates a mystery that is suspenseful and psychologically plausible,” writes former college president Bob Golden of New York. “The language and situations are contemporary and the political background completely believable. As parts of the American West face another year of severe droughts and incredible wildfires, the novel’s pertinence to our current situation is undeniable.”

Schneider’s book – the first in the Vic Bengston series – pits politicians and land developers, who covet water rights for economic and political gain, against farmers, who need the water to sustain their thirsty crops and keep their families on the land.

“This book is much more than your typical who-done-it,” writes Joanna Fetting of Colorado. “Controlling water (the substance) is crucial to Colorado’s economy, and WATER (the book) does an exceptional job of explaining that, plus it is an interesting tale.”

At the center of this resource war is Vic Bengston, a baby boomer who has returned to investigative reporting after a 25 year absence. Bucking his new bosses, the cops, and using his many sources, Bengston steadily unravels the mystery surrounding the murder of a high profile political figure.

And WATER – the West’s liquid gold – is at the heart of it all.

WATER is available as a kindle eBook from Amazon and in paperback at Amazon and select independent bookstores.

The next book in the series is “VOTE: A Vic Bengston Investigation,” due out later in 2014. In VOTE, Vic unravels the mystery behind the death of a computer entrepreneur. Along the way he uncovers a software security secret that governments and big business will kill to possess.

Award-winning former journalist and scriptwriter, Schneider writes from his base in Denver. He is the author of the popular and funny “Who Killed Porkchop?” a mystery novella set in Key West, also a kindle eBook.