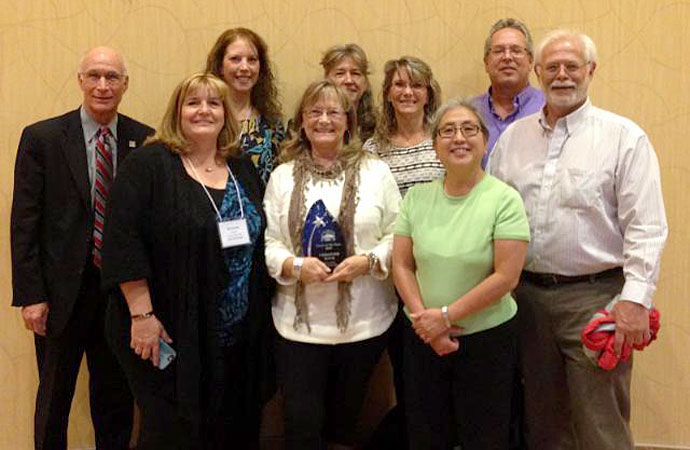 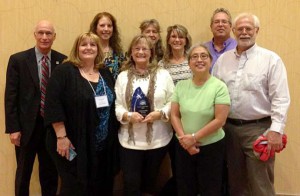 Koch received her award at the CMCA annual conference in Loveland on November 19.

In nominating Koch for the award, City Manager Mark Deven stated, “Chris has been Arvada’s City Clerk since 1994 and has earned the respect of not only her Arvada colleagues but of clerks across the state of Colorado. She has made a strong impact on Arvada due to her incredible efficiency and competency. Due to the many systems and processes that she has put into place, agendas, postings, records management, ballot preparation, passport applications, and much more appear to those outside the clerk’s office as effortless.”

Each year, CMCA honors and recognizes the contributions of individuals who have made a noticeable impact on their municipality or on CMCA; Clerk of the Year is the highest honor bestowed by the organization.

The award was a complete surprise for Koch, whose entire family showed up at the ceremony as well as Deven and Deputy City Manager Bill Ray. It has particular meaning for Koch as she is retiring in early 2016.

“I am honored, and humbled, to receive this award when there are over a hundred City Clerks in Colorado just as deserving,” Koch said. “It means so much to me now since I will be retiring in a few weeks and leaving this great organization, my staff and coworkers. I thank the Colorado Municipal Clerks Association for this award and for their support over the last 21-plus years.

The purpose of the Colorado Municipal Clerks Association is to educate Municipal clerks by offering professional development opportunities, promote a better understanding of the functions and responsibilities of the office, and advance the profession.