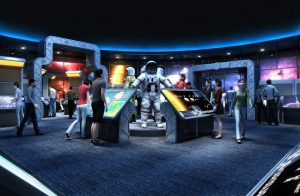 Wings Over the Rockies Air & Space Museum (Wings) enthusiastically announces the arrival of Be The Astronaut, an interactive pod-based exhibit that thrusts visitors into a world of space discovery.

Developed with assistance from NASA’s Langley Research Facility, Be The Astronaut challenges museum-goers to “discover the final frontier”. Broken down into three interactive parts, Be The Astronaut first places “explorers” at a NAV (Navigation) Station to explore basic concepts of the universe. Second, guests move to a SCI (Science) Station that reinvents the way users think about the science and technology needed to thrive in outer space. Finally, participants move to the FLY Station. The FLY Station puts guests in control of a variety of spacecraft, including a lander, a rover and an interplanetary spaceship, on a wide variety of extraterrestrial missions.

“Be The Astronaut adds a whole new dimension to our already thriving museum,” stated Wings Over the Rockies President and CEO, John Barry. “The power of this exhibition to teach STEM concepts in a fun and engaging way will make it a favorite of adults and children alike.”

Be The Astronaut will open to the public on Sunday, October 1, 2017 at 12:00 PM MST at Wings Over the Rockies Air & Space Museum in Denver, Colorado.