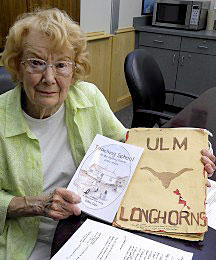 Teaching comes with lots of challenges – especially during the teacher’s first year on the job. But not too many had a first year like Edna Ogle’s.

Edna began her 30-year teaching career in a one-room schoolhouse in 1945 in Ulm, Wyoming, a small prairie town not far from the state’s northern border. There were 14 students spanning first through eighth grade. She lived and taught in a small building with no electricity or running water. She commuted by train and came home on weekends.

If that sounds like a story waiting to be told, wait no longer…at the age of 88, Edna has published a memoir of that year in the little schoolhouse on the windswept prairie.

Soon after she had the books in hand, the proud and energetic author embarked on a book signing tour to several northern Wyoming communities near the Ulm schoolhouse. Since returning home, she’s already had a call requesting more books!

Another book signing party is scheduled for Thursday, September 12, 3:30-4:30 pm at the Apex PRD Community Recreation Center, 6842 Wadsworth Boulevard, Arvada. That’s the place where Edna found a supportive community to write Teaching School on the Wyoming Prairie in the 1940’s. Soon after she decided to tell her story in print, she enrolled in the Creative Writing class offered at the Center. Two years later, she realized the dream of telling her amazing story, preserving the experience for family, friends and anyone interested in this window on a fascinating aspect of American history.

Instructor Danielle Steinfeld says Edna has “remarkable determination and exhaustive thoroughness. When she started my course, she rounded up every great book on writing she could find, and took the ideas to heart, reading chapters to us as she wrote and revised them. She was in the class for two years, and her writing skill grew by leaps and bounds. She’s an inspiration to the class!”

Edna’s own inspiration to write the story came from a “sorting and throwing away” project at her home, when she encountered a small manila yearbook full of her students’ work, and memorabilia from the school and its students. Fond memories washed over her, and in that moment, she decided it was time to tell the tale.

The 20 year-old Wyoming native graduated from a junior college in 1945 and spent the summer working at a defense factory near the college in Wahoo, Nebraska. But with World War II drawing to a close, it was time to return home and find a teaching job. She responded to an ad in the paper, and a few weeks later she was standing in the schoolhouse door welcoming her students.

The book’s pages bring to life all the people and events of the next nine months. There are loving and perceptive portraits of the children and their families, picnics on “Watermelon Hill,” games and field trips. She also coped with various challenges of school discipline, grades, weather…and last but not least, the cantankerous coal stove and an anonymous Halloween prankster who tipped over the privy.

At the end of the school year, Edna considered several options, and then decided to go back for a four-year degree and continue teaching. It was a choice that allowed her to live a philosophy that she says is also the book’s theme: “Bloom where you’re planted.”

Edna met her husband, Jack, while attending college in Denver. They had three daughters, and Edna’s teaching career continued at Pennington Elementary School in Wheat Ridge, where she taught for 27 years. After her retirement, she applied her skills and knowledge to volunteer positions such as museum docent, teaching English as a second language, and poetry consulting.

Her lifelong love for children and teaching shines out in the book’s final few pages, where she states “Each person is precious, and has a place, and the choice to bloom where they are planted.”

To purchase the book, contact Edna via email at ednaogle@comcast.net. Books may also be purchased at the signing, at the Tattered Cover Book Store or through the store’s website, tatteredcover.com