They Answered the Call to Duty 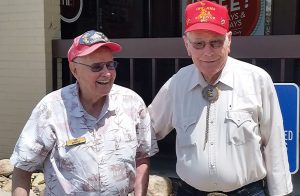 The Battle of Iwo Jima took place over 71 years ago. The 36 day battle was one of the hardest fought in battles during the war. Iwo Jima was an important island for Japan. It held three air strips and supply stops for navy vessels. Japanese fighter planes would intercept American long range B-29 bombers from this strategically placed island.

The Japanese war machine was nursing a wounded navy and depleted air force. They could not afford to lose such an important piece of real estate.

The Japanese were well prepared to defend a sea invasion. They were dug in with miles of caves and tunnels. Ready and waiting for the inevitable American invasion.

The Americans bombarded the island with Navy warships and Air Force bombers for three days prior to the invasion. Although the bombings did collapse a few tunnels they had little effect. When the Marines landed on the beach they were met with some scattered fire until they started to get bogged down in the heavy black volcanic ash/sand. When the troops started to bunch together, the Japanese began their defense with artillery, mortar and machine gun fire.

Casualties ran high on both sides. Of the 71,245 Marines who had gone ashore, 5,931 were killed in that bloody assault and 17,372 were wounded. The Japanese lost approx. 20,000 soldiers defending this key to Japan.

A few weeks ago we had the honor of meeting and talking to two veterans from World War II, Al Jennings and Don Whipple. Although both gentlemen are in their 90s we were talking to young men not older than 19. Their memories and the passion in their stories made it seem like yesterday.

Al Jennings from Bentley, Kansas, enlisted in December 1943 at only 17 years old. His parents had to give their consent for him to enlist. Al was training as an Amphibious Driver at Camp Del Ray when he was transferred to Camp Pendleton and joined the 26th Regiment. From Camp Pendleton, he shipped out to Hawaii in July of 1944 to train at Camp Tarawa. Camp Tarawa had similar terrain to Iwo Jima; lava, rock, and sand. Al stressed the amount of training they received prior to the landing, they were prepared to do their job. Al was a runner for his platoon, he became a radio operator and carried the radio on his back. The radio weighing roughly 70 pounds.

During the battle Al was knocked down by a powerful blow, his radio was gone, only a few pieces remained. Al had a little scratch. He didn’t know if it was a mortar shell or a bullet, he really didn’t care. He was alive. In the 80’s at a WWII reunion a fellow marine searched Al out and told him he was wounded from the radio that was blasted off his back.

Al saw 36 days of combat, all on Iwo Jima. His outfit, the 26th Marines were reserved for the 5th Division and went into Iwo Jima at 1500 hours, just as all hell was breaking loose. The Japanese had held their fire until the marines were on the beach and then unloaded. “So then we just had to try to stay alive. That was the main objective, and take down as many as we could,” he said. Al landed with 258 Marines, only 18 were alive or left with no physical wounds.

A week into combat on Iwo Jima, Al had heard his brother’s unit was also on the island. He asked permission to seek him out and found his brother’s friends in a foxhole protecting a can of peaches. They said his brother was saving the peaches for a special occasion. Al couldn’t think of a better time and had the boys open the peaches. When Al’s brother returned he asked, “Who the hell is eating my peaches?” Al turned around and said, “Who in hell cares?” When he saw it was me (the kid brother), everything was O.K.

Don Whipple had tried enlisting in June of 1943, but was turned away since he was not 18. He also needed his parent signature. On August 23rd (eight days before he turned 18), he boarded a train heading to California. Don completed boot camp then attended telephone school in Pine Valley, California and 30 days of mess duty serving chow to other Marines. He was then sent to Camp Pendleton and then off to Hawaii to train at Camp Tarawa.

Don, pulled out a photo of the invasion taken by a navy plane. The photo shows the island and the waves of Marines approaching the beach in navy landing vehicles. “This is my favorite photograph” he says as he points out the position of his landing craft. Although the photo was black and white Don runs his finger along the photo along the beach and says “all this was orange like the coals of a fire”.

0600 hours, Marines were filling up the landing ships and heading towards the island. Don recalls the landing ship next to theirs receiving a direct hit. As they came closer to the shore, the sense of doom of what they were about to enter started hanging over them. Trying to get communication equipment off the beach he was knocked out by a mortar shell. Only 15 minutes after landing on Iwo Jima, Don was wounded. His captain pulled Don into a shell crater, his leg was a bloody mess.

Don was eventually taken to an aid station waiting for transport to a hospital ship. The Marine next to him had no skin left anywhere and Don could see his heart actually beating. He leaned his head back onto the wall and prayed for him. Don was finally sailing out to the hospital ship. Once there, it was determined the shrapnel was too close to the bone and they could not remove it. Then it was announced the ship was leaving for Guam the next morning. He couldn’t bear the thought of leaving the island, leaving his brothers behind and his duty. There was a mechanic working on a boat next to the hospital boat and Don asked if he was returning to the island (this was an illegal action that Don was asking). The mechanic told him to get a uniform and jump aboard. He found a uniform from the “dead man’s pile” and hitched a ride with the mechanic back to Iwo Jima.

When he returned, he directed the fire into the caves of Mt. Suribachi. He watched both raisings of the flag by American soldiers on the same mountain. Don mentioned seeing the men of the 27th Marines walking around like zombies. No emotion and a vacant look in their eyes. Don didn’t understand how war can be the answer and if you have lived in a war, how it changes you forever.

When Don left the island, he commented that it was the “ugliest place he had ever seen, like a monster raising out of the sea. I will always remember the ugly smells of Iwo Jima; the smell of death, gun powder, and sulfur.”

Both Al and Don were getting ready to invade mainland Japan when the Japanese surrendered. Both men did occupational duty and then sailed back to San Francisco and San Diego respectively. On Al’s return trip, the Marines were informed they should expect their packs to be inspected for any souvenirs. As they were passing under the Golden Gate Bridge, the Marine’s in Al’s unit threw the Japanese rifles they had collected overboard.

Al and Don are heroes for all ages. In the few hours we were with them, they had quite a few people shake their hand and thank them for their exceptional and unparalleled service to our country. They received comments such as, it’s an honor to shake your hand, and you are true American heroes.

It is a spectacular quality in selflessly serving for your country. Right before we were leaving, a little three year old boy walked right up to Don and gave him a hug. No one asked or told him to do it.

Every year the pair try to attend the reunions of the 5th Marine Division. They participate in Cooper’s Troopers which is a group of Marine Veteran’s from various wars. It is a friendly group that meets once a month at the American Legion Wilmore-Richter Post 161, 6230 W. 60th Ave, in Arvada. They attend various functions that support the troops.

Don even jumped out of a plane during a Rocky Mountain Airshow last summer. It was days before his 90th birthday. He was able to parachute from a plane to begin the Airshow festivities! Al watched safely from the ground. But Don had no fear about the jump. He was taking in the cheering from the crowd and his friend Al.

It truly was an honor to sit and listen to these two gentlemen. They are incredible individuals and have so much to share. Al and Don are two heroes that keep a smile on your face because of the joy in their personalities and their love for life.