An Opportunity To Help… 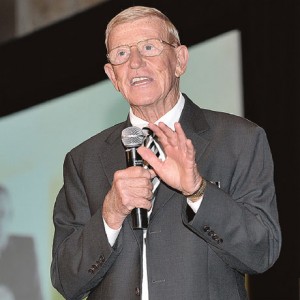 Coach Lou Holtz of Notre Dame speaks at the Benefit for Father Woody’s Haven of Hope.

A few weeks ago my wife Deb and I were invited to attend a benefit for Father Woody’s Haven of Hope. We were the guests of our wonderful friends John and Bonnie Capone. The affair began with the history of Father Woody’s Mission and personal stories of so many people who have benefited from this amazing charity. The guest speaker was Lou Holtz. I have been a Notre Dame fan most of my life and also a fan of coach Holtz. His message was both moving and inspirational and made you realize how we all need a helping hand at some point in our lives and kind words are a great beginning.

We are so grateful to John and Bonnie for this opportunity and feel very blessed to know them. One day I have to do a story on John. We are both from the same area in Pennsylvania. John moved to Colorado as a young man to make his life, and boy what a life he made! He just may be the most interesting, kind hearted and humble person I have ever had the pleasure of meeting. When I think of the term Gentleman or Lady, I think of John and Bonnie Capone.
We really enjoy being with them both and also meeting some of their friends who seem to be from the same mold. Good solid people, who have a genuine concern for other people.

The affair was very moving and the story behind this special charity and special man Father Woody who started this mission with his dedication and tireless effort to “serve and not to judge” is to follow. I hope you are inspired by it and can lend a hand in any way whether it be a donation, volunteering, or even with just a smile or a kind word of compassion to those who are in need. To all the volunteers and board members especially to the late Jay Gould who was the former Board President and did so much for the poor and underserved we thank you and honor you.

The History of Father Woody’s
Before anyone cared about the homeless, Monsignor Charles Woodrich known as Father Woody, became the voice and champion of the homeless.  His story began almost 40 years ago in one of those cold Colorado winter days when Father Woody wondered aloud, what would become of the homeless? Where would they seek shelter?

He decided to open the doors of his parish, downtown Denver’s landmark church, Holy Ghost.  To the dismay of many of the parishioners, for weeks, hundreds of homeless sought shelter at the parish. It was the only roof they had over their heads during the cold winter nights.  It was through that experience that he created one of Colorado’s largest homeless shelters, the Samaritan Shelter at 23rd and Lawrence.

Fast forward to December 1998, when several lay Franciscans recognized a true need for services to the homeless which were not being addressed by any other agency in the area.  They searched for and purchased the small dwelling at 707 Lipan in Denver from which to render services to the poor.  Because of its popularity, and the increase in the number people serviced, the need for a new building became critical.

In October 2007, a 5,700 square-foot building was erected. It was named, Father Woody’s Haven of Hope.  A monument to the late Monsignor Charles Woodrich who died in 1991.  With the new building ready to serve several hundred homeless guests a day, the motto has remained the same as 4 decades ago when Father Woody first opened his doors to those in need “We are here to serve, not to judge”.

The Mission of Father Woody’s is to Provide Food, Shelter, Clothing, Counseling, Rehabilitation and Hygienic Services to the Homeless and Indigent

Building Hope For the Future
Currently Father Woody’s serves up to 800 meals a day in a facility that seats only 80, and they gain approximately 300 new guest each month. Because of the older, smaller facility Father Woody’s has embarked on a $2 million campaign to expand their services to homeless and indigent men and women so that they can continue on their path to self-sufficiency.

Father Woody’s relies entirely on donations. And every donation, large or small helps the homeless. With your help, we can continue to provide these services.

If you would like information on how you can help Father Woody’s contact Melinda Paterson at 303-607-0855 X4 or email melinda@frwoodyshavenofhope.org.